Now, scientist makes it feasible to predict how volume for a given protein will alter between to unfolded and folded state. Computations precisely expect how a protein will react to enhanced pressure, shed light on the inner workings of life in the ocean depths, and might also offer insights into an alien’s life.

“We are discovering planets with ocean that, although cold at the surface are likely warm at the bottom. So what would life appear like in the space?” says George Makhatadze, a Constellation Lecturer of Biocomputation and Bioinformatics and member of the Centre for Biotechnology and Interdisciplinary Studies at Renssealer Polytechnic Institute. “With such computational ability, we can look at the proteome of barophilic organisms on Earth and ask, how such proteins adapt?”

Researchers have long known that a protein will unfold under enhanced pressure if its unfold state has a lower volume, and will remain folded if the unfolded state has a higher volume. But while researchers experimentally estimated a range of -4% to +1% change in volume as proteins immersed in water move from the folded to unfolded state, predictive computation to match those estimates has been harder to come by. 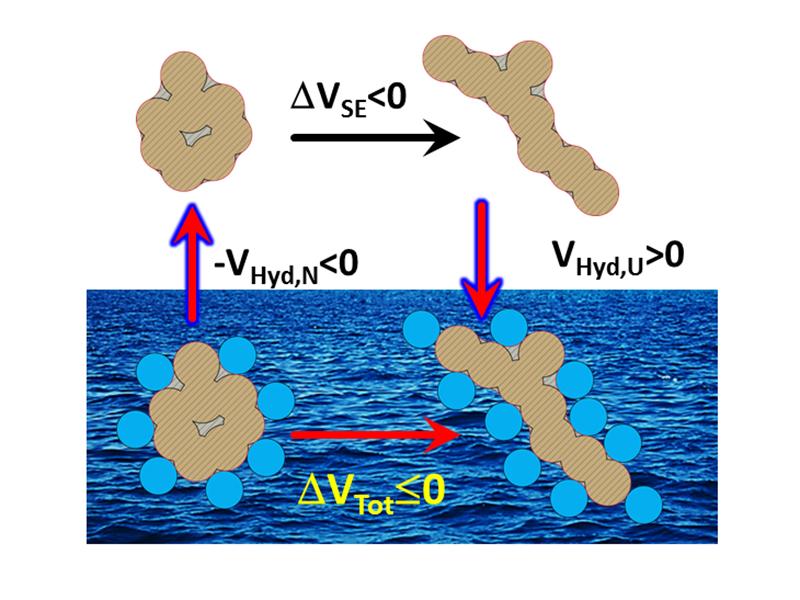 The protein volume paradox dates back to the primary X-ray structures of proteins, when images revealed that 30% of the volume of a protein is comprised of voids and cavities inside the imperfectly packed atoms of the structure. Scientists assumed proteins would lose about 30% of their volume when unfolded, and unexpected at the difference between that figure and experimental measurements.

Seeking to resolve the difference, scientists hypothesized that unfolded proteins were interacting with the water in which they were immersed, gaining volume, and proposed a ‘transfer method’ to estimate that effect. Their method tested the volume alteration of numerous ‘model’ molecules popularly found in proteins when moved from a non-aqueous solvent to water. But, the method yielded a tiny decrease in volume, compounding the disparity with estimates.

Makhatadze’s team identified numerous mistaken assumptions in the two postulates of the paradox. Although, the atoms of an unfolded protein are less densely packed than a folded one, the intricate shape retains some cavities and voids, so a 30% decrease in volume is unrealistic.

Makhatazde’s study is enabled by the vision of the novel polytechnic, an emerging paradigm for higher education which identifies that global challenges and opportunities are so great they cannot be precisely addressed by even the most talented person working alone. Renssealer caters as a crossroads for association working with partners across disciplines, sectors, and geographic areas, to address intricate global challenges, employing the most advanced technologies and tools, most of which are introduced at Renssealer