These computer chips in the development from the University of Wisconsin – Madison could create future computers more powerful and effective by linking tasks typically kept separate by design. Jing Li, an assistant lecturer of computer and electrical engineering at UW-Madison, is preparing computer chips that can be configured to act intricate calculations and store massive volumes of information within the same integrated unit and interact effectively with other chips. She considers them as ‘liquid silicon’.

“Silicon implies hardware and liquid implies software. It is a collaborative hardware/software method,” says Li. “You may have a supercomputer in a box, if you wish. We intend to target a range of very interesting and data-intensive applications, comprising voice or facial recognition, graph analytics and natural language processing.” 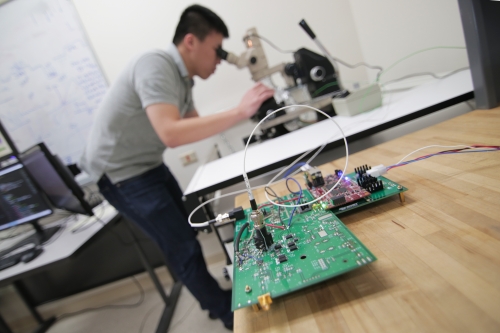 The big speed number crunching of processors and the data warehousing of big storage memory in advance computers normally fail to two completely distinct sorts of hardware. “There is a big bottleneck when classical computers require moving information between processor and memory,” says Li. “We were creating a unified hardware that can bridge the link between storage and computation.”

Memory and storage chips are usually separately generated by distinct manufacturing foundries then organized together by system engineers on printed circuit boards to create smartphones and computers. The separation implies even simple operations, such as searches, need multiple steps to achieve foremost fetching data from the memory and then transmitting the data all the way through the deep storage levels to the processor core.

The chips Li is introducing, by contrast, include memory, communication and computation into the similar device utilizing a layered design known as monolithic 3D integration – semiconductor and silicon circuitry on the bottom linked with solid-state memory assortments on the top utilizing dense metal to metal combinations. End users will be able to organize the devices to allocate fewer or more number of resources to computation or memory, relying on what sorts of applications a system requires to run.

“It can be flexible and dynamic,” says Li. “We originally think that it may be too difficult to use as there are numerous options. But with adequate optimization, anyone can be benefitted of the rich flexibility delivered by our hardware.”

To assist people harness the potential of novel chips, the Li’s group also is introducing software that translates common programming languages into the machine code of chips, a procedure known as compilation.

Provided that testing accounts for more than half the customer cost of computer chips, possessing such advanced infrastructure at UW-Madison can aid make liquid silicon chips a reality and trigger future research. “We can perform all sorts of device-level, system-level and circuit-level testing with our platform,” says Li. “Our industry partners inform us that our experimenting system does the complete job of a test engineer automatically.”