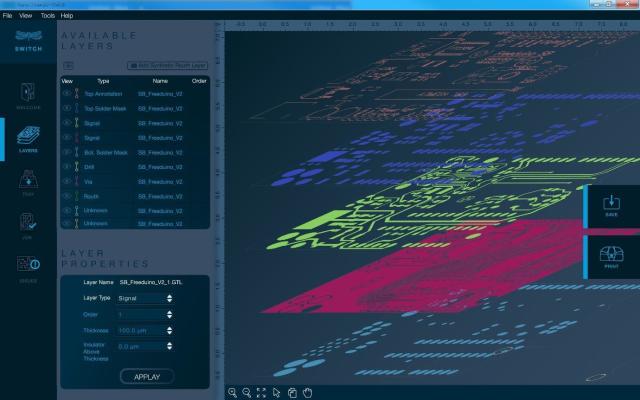 The concept of 3D printing came to light almost 3 decades back when designers, manufacturers, and engineers felt need for a technology that could help them produce their mockups and prototypes rapidly. As the world of 3D printing kept evolving, its grew up to become a medium of manufacturing across a number of industries for a wide range of materials. The principle has been adopted by an Israeli firm called Nano DImension that forayed in manufacturing world with a technology that allows them to prototype the Printed Circuit Boards (PCBs) rapidly.

The DragonFly 2020 3D printer from this company is capable enough to 3D print PCBs on a small scale. These will help the manufacturers and engineers iterating the circuit board concepts in a quick and affordable manner. The technology is a step ahead from the customary methods that were used till now. The day is not far when we will be using a 3D printing technology for end parts production which will be a fully functional electronic equipment.

DragonFly 2020 is actually a 3D printing platform that has been specialized for three dimensional printing of PCBs. The system uses ink deposits just like the regular inkjet 3D printers. While one of the inks used in it is a photopolymer others are formed from highly conductive silver nanoparticles.

The DragonFly 2020 jets out these two materials in form of layers which begins with underside conductive traces and ends on the topside conductors. This results in a functioning circuit board formation. As Fried, the CBO of Nano DImension, likes to explain, “ We realized from the beginning that inkjetting was the key technology for this application, there are a few areas where we see the technology where we see the technology as being a strong one. The printers most capable of multi material 3D printing are inkjet 3D printers. In the future if we want to increase the speed and size of such a system, we can add more printheads.”

Although, the inkjet 3D printing process is very much similar to this one, the DragonFly 2020 3D printer as well as its inks have been designed specially for printing circuit boards. The company claims, this innovation will bring considerable changes to the printing industry. As Fried likes to add, “There may be about 16 layer board, the more layers there are and the greater the justification for bringing the technology in house. Although even lower layer counts will benefit from the spread of iteration.”