Continue to Site
Have you ever heard that your engine revolve through the radio while you listen to an AM station in your vehicle, or have you witnessed your television making vibrating sound when your telephone is around it? If yes, then you have experienced what is scientifically known as electromagnetic interference. It is a procedure caused due to electromagnetic waves, which can invent from anything that carries, created or utilizes an electrical current, comprising internet cables, cell phones, computers and television. A team of scientists at Drexel University and the Institute of Science and Technology in Korea is practicing eradicating electromagnetic pollution by incorporating the release within a sleek layer of a nanomaterial substance known as MXene. 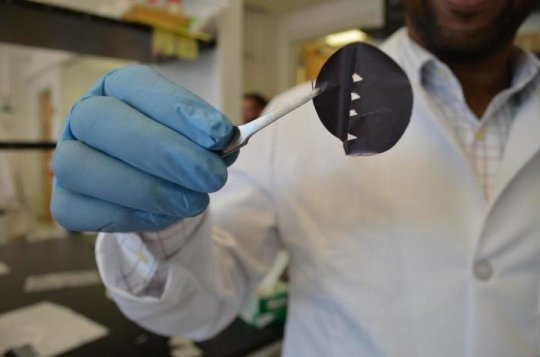 Electromagnetic radiation is present everywhere in the universe. But the propagation of electrical in current decades has funded to the radiation volume created on Earth and its noticeability. “As there is evolution in technology and electrical equipment becomes faster, smaller and lighter, there is a drastic increase in their electromagnetic interference,” says Babak Anasori, a Ph.D and research assistant lecturer in the A.J. Drexel Institute of Nanomaterials.
“Internal electromagnetic disturbance coming from distinct electrical components can have severe effect on everyday gadgets like tablets, laptops and cell phones resulting in complete degradation and malfunctioning of the gadget.”
Such effects vary from temporary monitor ‘fizziness’, suspicious buzzing from a Bluetooth gadget to reduce processing speed of a mobile gadget. Protecting against electromagnetic interference normally comprises enclosing the interior of gadgets with a covering of conductive substance such as aluminium, copper or a layering of metallic ink. It is not only effective but it also adds volume to the gadget and generates a limitation on how small the equipment can be designed.
“In general, proper protection can be accomplished by utilizing thick metals, but material consumption and mass leave them at a disadvantage for utilization in telecommunication and aerospace applications,” says Anasori. “Hence, it is of high significance to accomplish better protection with sleek films.”
Scientists carried the experiment on sample of MXene layera varying in thickness from only a couple of micrometers up to 45 micrometers, which is extremely thinner than a hair of human. It is vital because the protective efficacy of a material, which is also useful to estimate a material’s ability to block electromagnetic radiation from moving through it, tends to boost with its thickness and for this study the group was attempting to identify the thinnest iteration of a protective substance that could efficiently block the radiation.
They found that the sleekest layer of MXene is competing with aluminium and copper foils for shielding effectiveness. If thickness of MXene is increased to 8 micrometres then it is possible to achieve 99.999 percent radiation blockage with frequencies wrapping the range from radars to cell phones.
“It is a significant finding because numerous commercial applications for an electromagnetic interference protection are engrained in a singular substance,” says Gogotsi. “MXene showed numerous great characteristics including simple processing, high flexibility and small thickness. So it is an excellent substance to be used in multiple applications.”
Filed Under: News