The method employs a solvent reaction with a bimetallic alloy where in one of the metals is reactive to create bundles of nanowires upon reactive metal dissolution. The procedure is conducted at ambient temperature and pressure levels without the use of catalysts, costly procedures or toxic chemicals like chemical vapour deposition. The produced nanowires can be employed to enhance the electrical, mechanical and thermal properties of functional composites and substances.

The study was supported by the California-based Sila Nanotechnologies and the National Science Foundation. The procedure is believed to be the foremost to alter bulk powders to nanowires at ambient conditions.

“Such method could open the door for an assortment of synthesis opportunities to manufacture cost-effective 1D nanomaterials in big quantities,” says Gleb Yushin, a lecturer in the School of Engineering and Materials Science at the Georgia Institute of Technology. “You can necessarily put the hefty substances into a bucket, fill it with an appropriate volume of solvent and gather nanowires after a couple of hours, which is quite simpler than how many of such structures, are manufactured today.”

Yushin’s scientific group, which comprised former graduate students Danni Lei and James Benson has manufactured oxide nanowires from magnesium-lithium and aluminium – lithium alloys employing a range of solvents, comprising simple alcohols. Production of nanowires from other substances is a part of on-going study that was not reported in the paper. 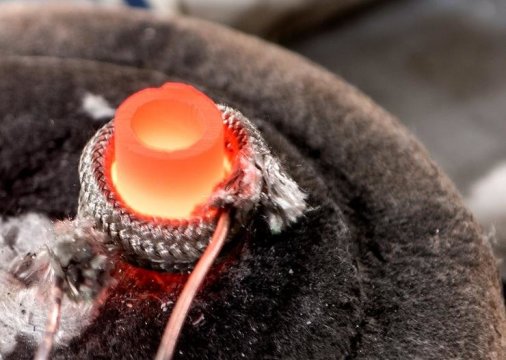 The dimensions of the nanowire structures can be regulated by varying the solvent and the processing situations. The structures can be prepared in diameters varying from tens of nanometres up to microns. “Minimization of the interfacial energy at the boundary of the chemical reaction front enables us to prepare tiny nuclei and then retain their diameter as the reaction proceeds, thus preparing nanowires,” explains Yushin. “By regulating the volume changes, surface energy, solubility and reactivity of the reaction products, along with the temperature and pressure, we can tune conditions to produce nanowires of the dimensions we intend.”

One of the impressive applications may be separator membranes for the lithium-ion batteries, whose high power density has made them more attractive for powering everything from consumers electrical to aircraft and motor vehicles. But, the polymer separation membranes employed in such batteries cannot withstand the high temperatures generated by certain failure scenarios. As result, commercial batteries may induce explosions and fires, if not designed very carefully and it is highly hard to avoid defects and errors consistently in tens of millions of devices.

The novel method was introduced accidentally while Yushin’s students were attempting to prepare a novel porous membrane substance. Rather of the membrane they had expected to fabricate, the procedure generated powders composed of elongated particles.