This technology could offer support to tens of millions of people universally suffering from neurodegenerative ailments that affect eyesight, including retinitis pigmentosa, macular degeneration, and loss of vision because of diabetes.

Despite massive advances in the development of retinal prostheses over the past two years, the performance of equipment presently on the market to aid the blind regain functional vision is still severely constrained, well under the acuity threshold of 20/200 that delineates legal blindness.

“We intend to prepare a novel group of devices with drastically enhanced potentials to help individual with impaired vision,” says Gabriel A. Silva, one of the head authors of the work and lecturer in ophthalmology and bioengineering at UC San Diego. Silva is one of the primary founders of Nanovision.

The novel prosthesis depends on two revolutionary technologies. One comprises of assortments of silicon nanowires that simultaneously sense light and electrically boost the retina accordingly. The nanowires offer the prosthesis higher resolution than anything photoreceptors in the human retina. The other revolution is wireless equipment that can transfer data and power to the nanowires over the same wireless ink at record speed and energy efficacy. One of the primary differences between the scientist’s prototype and current retinal prosthesis is that the novel system does not need a vision sensor outside of the eye to gather a visual scene and then alter it into varying signals to sequentially boost retinal neurons.

Rather, the silicon nanowires copy the retina’s light sensing rods and cones to directly boost the retinal cells. Nanowires are coupled into a grid of electrodes, directly triggered by light and supported by a single wireless electronic signal. This direct and local transformation of incident light into electronic simulation makes for a much simpler and scalable architecture for the prosthesis. The power offered to the nanowires from the singular wireless electronic signal offers the light-activated electrodes their high sensitivity while also regulating the timing of simulation. 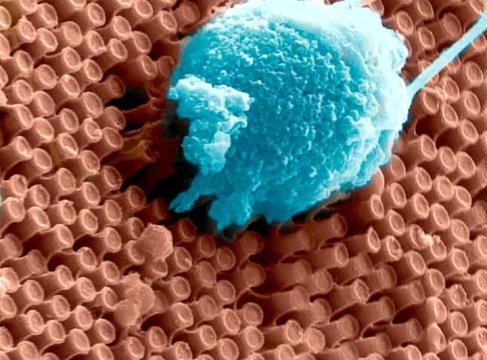 “For restoring the functional vision, it is crucial that the neural interface matches the sensitivity and resolution of the human retina,” says Gert Cauwenberghs, a lecturer of bioengineering at the Jacobs School of Engineering at UC San Diego.

The bipolar and horizontal neurons fired action potentials preferentially when the prosthesis was showcased to a link of electronic and light potential, and were silent when either light or electronic bias was absent, confirming the light-triggered and voltage-regulated responsively of the nanowire assortment. The wireless nanowire assortment device is the result of an association between a multidisciplinary groups headed by Cauwenberghs