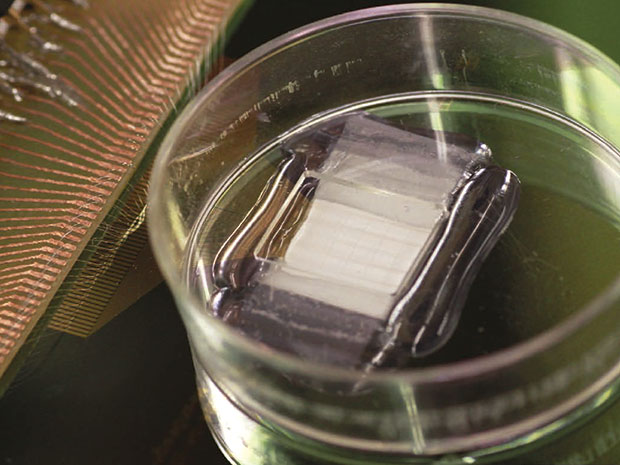 Myocardial resection happens to be one of the most common treatments procedures for heart diseases. Under this procedure, the damaged section of heart tissue is removed. Researchers all across the globe have been making serious efforts to find a way to fill the space from where damaged tissue was removed. Efforts are being made to create 3-D scaffolds that could act as a base for regeneration of heart muscles. However, it is an incomplete approach that doesn’t paves a path to keep a consistent control over development of new tissues.

The problem was recently addressed by a team of researchers at Harvard University. The team leader claims to discover a new way for formation of tissue scaffolds that could be both monitored and controlled. For this purpose, researchers mimicked 3-D nanoelectric arrays which open gates for real-time control and mapping of electrophysiology in heart tissues. As per the research description given in the Nature Nanotechnology’ journal, Charles Lieber, the lead researcher took a bottom up approach that began with the fabrication of doped p-type silicon nanowires. Lieber has spearheaded usage of silicon nanowires for creation of scaffold that could act as base for generation of muscle, heart, and nerve tissue in coming years.

In this project, the team was able to develop nanowires and fix those over a polymer surface and re-arranged those into a field-effect transistor (FET). The researchers refrained from enhancing the impedance of the device since its dimensions were reduced considerably through adoption of FET approach counter to simple configuration of device as electrode. Each FET with its source-drain interconnects, formulated a 4-micrometer x 20-micrometer x 350 nanometer pad. Every single pad of this kind will act as a recording device for the regeneration of new muscles.

In Lieber’s words, “Our latest work shows for the first time a nanoelectronics-enabled scaffold with both size scale and mechanical properties on the same order of magnitude as conventional cardiac tissue scaffold made of FDA-approved biomaterials. Compared to previous work, we have reduced the device dimensions by 10x and 1000x softer- which is critical for being matched to the tissue. Out latest work demonstrates an array of more than 100 incorporated sensing devices, versus only 3 previously. This larger scale integration of active devices allows for true 3-D mapping of action potentials. Due to the fast response time of nanoelectronics, such 3-D activity mapping has sub-millisecond single-shot time resolution, which greatly exceeds capabilities of optical methods.”