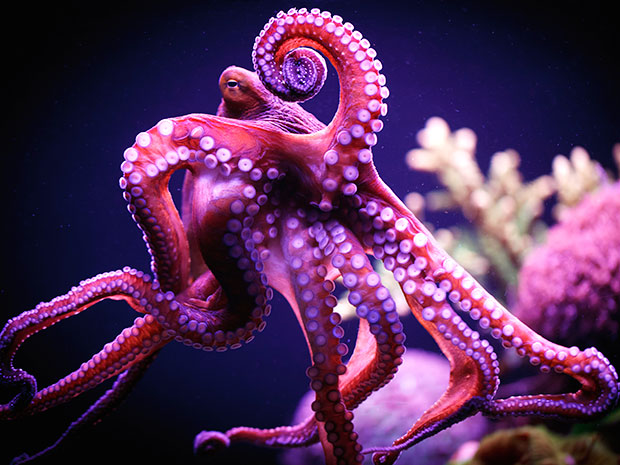 Octopuses are world-wide appreciated for their intelligence, their potential as escape artists, and their spectacular potential to camouflage themselves. Materials researchers are also attracted by the adhesive characteristics of their tentacles. By regulating the pressure control in their suckers, the cephalopods can swiftly capture into and then free themselves from any surface they come across as they describe their path along the floor of the ocean.

Now scientists featured by material researcher Hyunhyub Ko at the Ulsan National Institute of Science and Technology (UNIST) in South Korea have introduced octopus-enthused adhesives. Such adhesives can be utilized in the transferal printing of nanomaterials to create flexible electronics and compound semiconductor gadgets on silicon. These adhesive wads can be gathered and place a wide array of nanomaterials, as well as indium gallium arsenide nano-ribbons, and situate them on a flexible or wafer substance.

Nature, over the years, has provided various types of adhesives that put chemical engineers to dishonour – such as gecko’s foot and tree-frog toes. Efforts to imitate them have produced flurries of examination papers. But in almost every case, engineers have a problem similar to the natural adhesives – high off/on strength ratio, says Ko, who enter into this space through his performance on the electronic skin.

Flexible circuits, pressure sensors, and other electronics might offer future robots and prosthetics an improved sense of touch. But they can be a problem to build. Introducing such flexible electronics involves some laborious transferring of micro-ribbons and nano ribbons of inorganic semiconductor materials into rubber or polymer sheets. In search of a simpler way to perform this transfer printing, Ko shifted to the octopus for motivation.

Each of the suckers of the animal contains a fault whose pressure is regulated by encompassing muscles. When a single set of muscles contracts, the sucker wall thins. It boosts the overall mass of the trouble, diminishing the pressure in the sucker about the surroundings and generating suction. When it is the period to let go, other muscles compress to thicken the wall, enhancing the pressure and liberating the sucker.

To imitate this approach, Ko generated an assortment of micro scale ‘suckers’ with the use of the rubbery material PDMS. Sheets of PDMS perforated with pores are layered with a thermally reactive polymer to generate sucker-like walls. At varying temperatures, the polymer is hydrophilic, inflamed up with water. When a material pad is heated to 32 degrees Celsius, the polymer goes through a transition of the phase, becoming hydrophobic. It contracts dramatically, generating suction. The adhesive support spikes from .32 kilopascals to 94 kilopascals at an extreme temperature.

According to Ko, “Such temperature regulation makes it highly convenient to transmit semiconductor nano-ribbons. We can even transmit any nano-material to a substrate.” Ko confirms that such adhesives could also be utilized as the substrate for various types of health sensors, thereby avoiding the requirement of any additional glues. The adhesive is extremely sticky at normal temperature, 37 degrees; it could be eradicated by soaking under cold water – with non-hurting Band-Aid tear.