ON Semiconductors is set for CES 2020 with an innovative range of technologies for connected buildings, smart homes, and personal IoT systems. 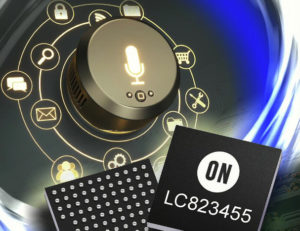 LC823455 will feature a cloud-based VUI demonstration for communication with IoT-based, edge-node applications.

The rising trend of voice user interfaces (VUI) and voice controls has turned audio processing significant to the success of various household applications and building automation. ON Semiconductors is expected to showcase its two TOP technologies based on LC823455, which offers one of the most prominent features for portable sound systems that’s compatible with VUI.

The Connected Lighting Platform is an energy-saving solution by ON Semiconductors for several kinds of developing industrial LED lighting systems. The lighting is offered as a service and has the ability to bring down energy consumption to a considerable level. It brings with it a Bluetooth Low Energy connectivity, offered by the RSL10 SIP and PoE (Power over Ethernet), for wired connectivity requirements. The platform also features on/off and light dimming functions.

In case, you’re looking for battery-powered security cameras, then you can look forward to a new, low-power 4MP HDR solution. The company will be showcasing its Ambarella CV25 AI SoC and AR02371IR CMON image sensor-based, anti-spoofing face-recognition demo. Together, these features will take up video surveillance to a completely new level of effectiveness and security day in day out.