Access to safe and clean water is one of the biggest global desires that remains unfulfilled for every one out of ten people. The problem is so big that almost every other scientist and researcher across the world is busy fighting it in one or the other way. A valid solution to this problem was recently discovered by a team of researchers in Cardiif University. Apparently, the team has been using Raspberry Pi to aid in the efforts being made to bring safe drinking water in the most abandoned and poorest parts of the world.

Basically, the water purification process involves three processes, two out of these three are very simple: first the filtration that removes all kind of particulate matter and then heating at some hundred degrees centigrade that kills all other kinds of bacteria. The third part, however, is a tough one which includes elimination of highly toxic hydrocarbons that enter water through pesticide and fertilizer run off. It is one of the most difficult things to be removed from water and also the costliest process.

The group of researchers working in Cardiff University are busy finding a cost-effective method of hydrocarbon removal from water with the help of photocatalysis. It means they are trying to find a way to produce clean water by using a modified version of sunlight, an awesome concept isn’t it? In the following picture you can see Raspberry Pi sitting on one side completing the complete setup. A low-cost, abundant chemical is being used for this process- the titanium dioxide. It is spin-coated over a glass wafer that is kept over the bottom end of the beaker that is covered by a UV LED from the top. The wafer coating plays the role of semiconductor in the process as and when the UV photons from LED come to it. 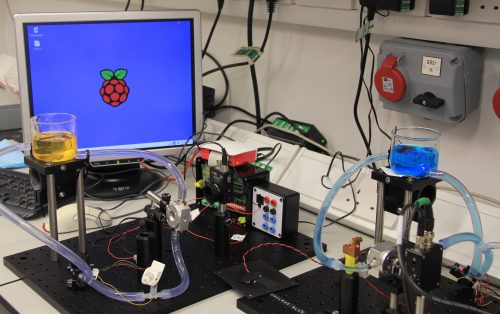 The electrons on its surface start moving, creating loopholes with positive charge and a few others with negative charge. This sets a chain reaction of oxidation and reduction breaking down of hydrocarbons leaving pure water as residue. The solution is pumped in the breaker with the help of flow cell where a LED light source shines through the stream. The amount of light traversing through the solution is taken care by photodiode. The photodiode then converts this output into voltage that can be noted by the Raspberry Pi through an ADC.