The scientists at the VTT Technical Research Centre of Finland have opted for an unlikely material for generating pint-sized power storage units – porous silicon. The researchers have identified numerous novel features in this fragile electrode material to transform it into a powerhouse. They have identified that covering the top layer of this material with a nanometer-thick coating of titanium nitride creates all the difference.

Porous silicon is a highly poor super capacitor electrode product. But with a coating of titanium nitride it works well and delivers efficient performance. As explained by Mika Prunilla, the Research Team Leader at VTT, “A nanometer thick layering of an efficient material increases the overall performance of the porous silicon and makes it an excellent material to be used. The main troubles with porous silicon were great electrical resistivity and chemical reactivity. The high resistivity results in low power and chemical reactiveness results in poor stability.” 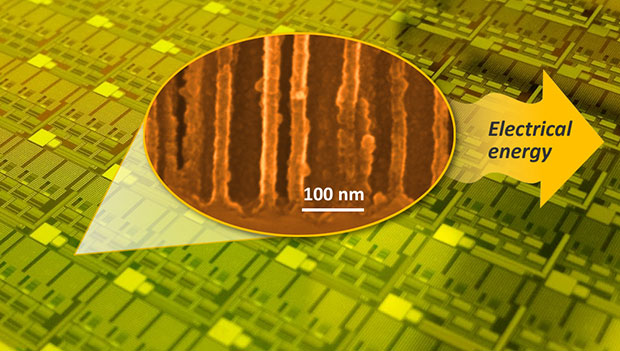 Prunilla identifies that by placing additional concentrations of dopants, there are not much better results availed. Extremely doped porous silicon can still act as a premium insulator because the volume of the tiny nanostructures results in robust depletion in the left behind silicon.

“The thin coating of titanium nitride is a solution to both issues, either of which would otherwise be a showstopper,” says Prunilla. “It delivers chemical inertness and great conductivity resulting in great stability and extra power, respectively. Also, porous silicon offers the extraordinary surface area matrix.”

The operational figures estimated by Prunilla and his team are impressive. While the scientists described achieving up to 13,000 cycles of charge – discharge without a significant decline in capacitance, Prunilla states that his team has continued to perform the cycles of charging and depletion and have reached to a level of 50,000 cycles. This rotation also includes the drying up of the electrodes during the process without electrical or physical deterioration.

“The number mentioned in the data was limited by the available measurement time and not just by the performance of these electrodes, “says Prunilla. “According to me, the supercapacitors must remain to stay stable up to 100,000 cycles.

The manufacturing challenge is still there and also remains the requirement to augment the capacitance level each unit surface area for reaching the maximal level of the technology. “This type of capacitor has numerous potential uses, from energy storage or energy harvesters to stabilizing the energy of consumer electronic gadgets,” says Prunilla.

Till date, the VTT researchers are performing further device and material studies intended at optimizing the super capacitor electrodes. According to Prunilla, there is another vital topic to enhance the fundamental understanding of the electrochemical and electrical behavior of titanium nitride electrolyte interface.