The research team from University of California San Diego recently came up with a magnetic ink that can self-heal batteries, wearable & textile-based electric circuits as well as electrochemical sensors within no time. The basic ingredient of this ink are microparticles that are oriented in a specific configurations under the effect of magnetic field. The orientation leads to magnetic attraction between the particles on both sides leading to self-healing of the device they are placed or applied in. The ink is capable of taking care of tears as wide as 3 millimeters which is peak of self-healing systems.

Joseph Wang, the director of Center for Wearable Sensors and UC SAn Diego’s Chair of nanoengineering department, says, “Our work holds considerable promise for widespread practical applications for long-lasting printed electronic devices.” The pre-existing self-healing substances always needed a trigger from outer end to begin the healing process. The time they take is somewhere between a few minutes to few days. Au contraire, the new system developed by Want and his team needs no external catalyst to do its job. The damage can be repaired within 50 milliseconds i.e. .05 seconds.

These engineers employed this ink to print textile-based electronic circuits, wearable electronic circuits, electrochemical sensors, as well as batteries. Once done they began to damage these devices by pulling or cutting them creating large wide gaps. These devices were damaged nine times from the same point. The team also damaged these devices from four different places and all of them were able to heal themselves and recover their normal working without any loss in conductivity.

For instance, they printed a self-healing circuit on a t-shirt sleeve and then connected it with a coin battery and a LED light. Then they tore off the circuit along with the fabric it was printed on. The LED turned off instantly. However, after a few seconds it began turning on again as the two sides of circuit came together and healed themselves. Amay Bandodkar, one of the first authors of this paper and also the first Ph.D holders from Wang’s lab, says, “We wanted to develop a smart system with impressive self-healing abilities with easy to find inexpensive materials.” 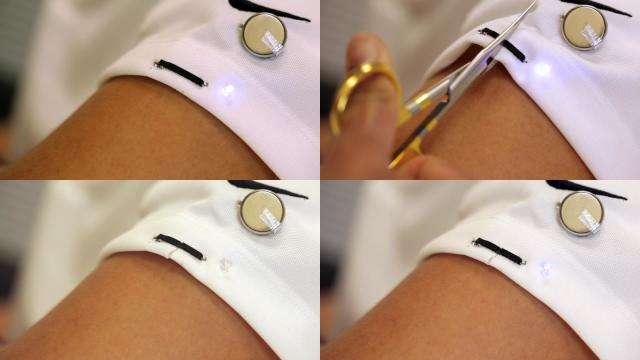