A team of researcher at Cornell University recently designed graphene membranes in form of micrometer-scale that can be activated by voltage for transferring one kind of mechanical vibration to another. According to these researchers, this ability can help in development of new applications in telecommunications sector where graphene based mechanical resonators can be used in modulation of carrier waves through signals. During this research, it was found that graphene can be used in generation of three different kinds of vibration frequencies in the graphene based circular drums. Each vibration, mode, or frequency was teamed with one another for exchange of energy. 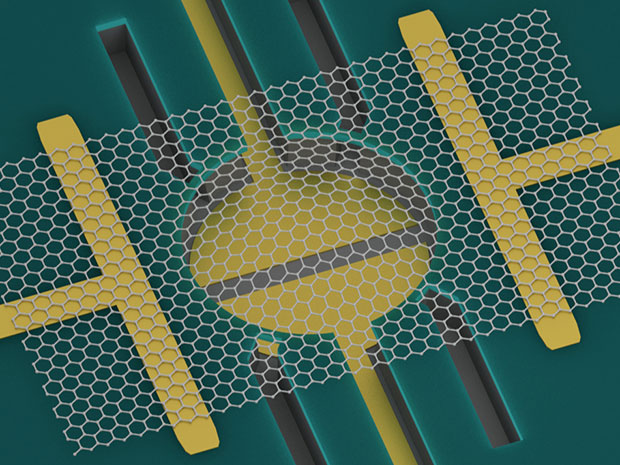 The lead researcher of this group, Robert De Alba, says that, “We’ve shown that there is an effect that will convert energy from one mechanical mode to another mechanical mode. It allows us to either damp out or amplify vibrations of one mode by activating the other mode.” The graphene drums used in this research ranged across a size range of 5-20 micrometers. Vibration in every single drum could be started either by alternating electric field or via use of thermal vibration of its constituting atoms.

The team likes to call these drums as “phonon cavities” as these behave like optical cavities that can be used in production of laser light as well as conversion of laser energy into mechanical energy. Phonon are the vibrations taking place in a crystal lattice that can be used for carrying energy. Thus, it can be concluded that phonons are quasi-particles that produce vibrations just like photons produce lights.

A discovery of this kind is not a new one, a while back we all saw treatment of graphene as a drumhead by a team of researchers at University of Maryland and National Institutes of Standards And Technology (NIST). 2 years back,  a team of scientists at Netherland based TU Delft’s Kavli Institute of Nanoscience explained how application of drumhead principal for graphene could help in production of new kind of sensors for mobile handsets. The Cornell University research team predicts a wide opportunity for these graphene-based phonon cavities. When freezed up to a temperature of absolute zero such equipment can be used in detection of fine quantum signals. De Alba further adds that, “And because graphene is only a single atom thick, it has such a low mass that it makes a very good force sensor, gas sensor, or pressure sensor. It could be used in research labs to study ultra-weak forces.”