Raspberry Pi has been growing forth with jet speed and the biggest proof of it is the speed with which it is launching its new products and versions of existing products. This time, the tech giant came with the Compute Module 3 which is embedded with multi-core and 64-bit functionality. It is derived from the BCM2837 processor that is currently empowering the Raspberry Pi 3. It is clocked at 1.2 GHz accompanied by a 1 gigabyte RAM. The details of this launch can be noted at the Raspberry Pi blog.

It is stated in the blog that, “Way back in April of 2014 we launched the original Compute Module (CM1), which was based around the BCM2835 processor of the original Raspberry Pi. CM1 was a great success and we’ve seen a lot of uptake from various markets, particularly in IoT and home and factory automation. Now it has a new CM3 based on the Raspberry Pi 3 hardware. Take note: It is “providing twice the RAM and roughly 10x the CPU performance of the original Module.” 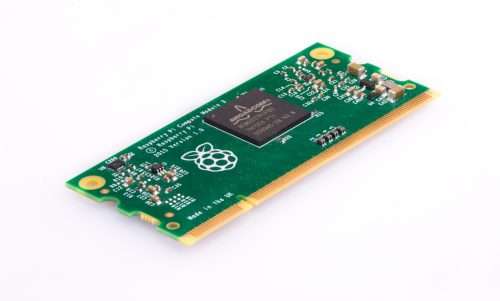 This one is being counted among the biggest upgrades that has been released in last 2 years. The original module was blend of first generation Pi along with a mini SODIMM layout module. The new iteration makes use of the very same BCM2837 along with a quad-core 64-bit ARMv8 part which makes this module updated with all latest features and upgrades. It can be availed in two flavors – CM3L (lite) and CM3. The Lite version of this module comes without eMMC flash. The RS Components describes it as “not fitted with eMMC Flash and the SD/eMMC interface. But pins are available for the designer to connect their own SD/eMMC device.” This latest version is currently in use by NEC in displays that are meant for digital signs, presentations, and streaming.