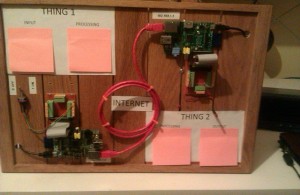 In this tutorial, two Raspberry Pi computers are used to monitor a switch, and to control an LED, which are connected via a local area network. When the switch is closed, LED comes on and vice versa. In the picture above, there are 4 post-it notes for writingabout the invention they want to do. For example, the switch could represent the monitoring of a patient heartbeat in tele-health application, where the local processing can represent heartbeat and the remote processing can look up a patient record and compare heartbeats against previous records, and the LED could pop up the alarm on a doctor’s mobile phone.

The building blocks of the demonstrator is based on a workshop divided into three section that is flashing an LED, sensing a switch, and the network chat application. The server code for sensing the switch is simple and is based on the network chat application. It is dependent on an incoming connection before accepting. In case, when it loses connection, sever waits for another incoming connection. In doing so, the whole system automatically recovers when the network disappears.

The client code is simple and is based on the network chat application to connect to the server via a known IP address, earlier configured. To set up a static IP address on both Raspberry Pi’s, the Pi uses “Auto-MDX”.

Check out the following link for complete details.