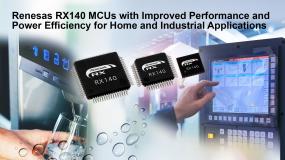 Built around Renesas’ powerful RXv2 CPU core, the RX140 MCUs deliver excellent performance, with operation of up to 48 MHz with a CoreMark score of 204, which is equivalent to approximately twice the processing performance of the RX130 group.

The RX140 MCUs also boost power efficiency by over 30 percent compared with previous RX130 MCUs, achieving power consumption as low as 56 µA/MHz when the CPU is in active mode and as low as 0.25 µA in standby mode. This enables the RX140 MCUs to realize high performance and low power consumption in a wide range of products, such as home appliances, industrial, and building automation (BA).

As part of Renesas’ RX capacitive touch MCU lineup, the RX140 MCUs allow customers to develop reliable, high-end capacitive touch systems for applications in a variety of environments. These include home appliances such as microwave ovens, refrigerators, and induction heat cooking stoves, as well as manufacturing equipment, building control panels, and devices that can detect remaining quantities of water or powder on surfaces.

“The RX100 Series of ultra-low power MCUs is gaining popularity for the superior scalability it offers as the entry-level model for the RX Family,” said Sakae Ito, VP of the IoT Platform Business Division at Renesas. “With the release of the RX140 MCUs offering improved performance and power efficiency alongside the latest capacitive touch IP, we continue to bring advanced solutions that enable customers to create products that combine enhanced functionality, design, and usability.”

The RX140 MCUs also features improved peripheral functions. For example, the number of I/O ports has been increased to allow control of more sensors or external components, and CAN communication support for real-time operation has been added. A built-in AES encryption accelerator and true random number generator reduce the risks of security threats such as data leakage or manipulation.

Designed for scalability, the new RX140 MCUs also maintain pin compatibility with the RX130, enabling customers to upgrade while continuing to make use of existing design resources.

Renesas also introduced the Target Board for RX140, which provides access to all signal pins, for initial evaluation work. The board is equipped with a Pmod connector to allow easy connection of sensor modules.