The novel NIST theory and researches, revealed that a microscopic mechanical drum, a vibrating aluminium membrane could be cooled to less than 1/5th of a single quantum, or energy pack, lower than ordinarily expected by quantum physics. The novel method theoretically could be employed objects to absolute zero, the temperature at which matter is devoid of closely all energy and movement, confirm NIST scientists.

“The colder you can obtain the drum, the better it is for any of the application,” says NIST researcher John Teufel, who headed the study. “Sensors would become more sensitive. You can store the data longer. If you were using it in a quantum computer, then you would estimate without distortion, and you would actually get the answer you wish.”

“The results were an absolute surprise to proficient in the field,” says the group leader of Teufel and co-author of the study, confirms Jose Aumentado. “It is a very sophisticated study that will certainly have a lot of impact.” The drum, 20 micrometers in diameter and 100 nanometers thick is embedded in a superconducting circuit designed so that the drum movement influences the microwaves bouncing inside a hollow enclosure known as electromagnetic cavity.

The microwaves are a sort of electromagnetic radiation, so they are in effect a sort of invisible light, with a longer wavelength and lesser frequency than the visible light. The microwave light within the cavity alters its frequency as required to match the frequency at which the cavity naturally vibrates, or resonates. This is the natural tone of cavity, analogous to the musical pitch that a water-filled glass will sound when its rim is rubbed with help of a finger or its side is struck with a spoon. 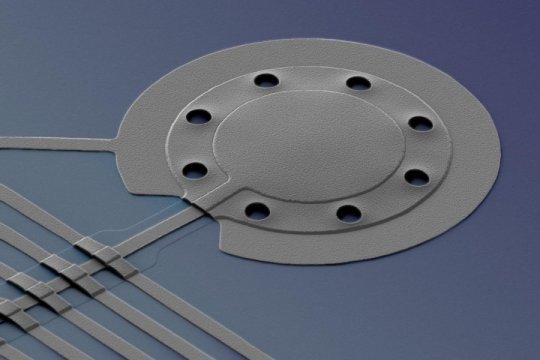 NIST researchers primarily cooled the quantum drum to its lowest energy ‘ground state’, or one-third of the quantum. They employed a method known as sideband cooling that involves applying a microwave tone to the circuit at a frequency below the resonance of cavity. Such tone drives electronic charge in the circuit to make the drum beat. The drumbeats release light particles, or photons that naturally match the greater resonance frequency of the cavity.

Such photons leak out of the cavity as it fills up. Each departing photon takes with it one mechanical unit of energy, one phonon, from the motion of drum. This is the same thought as laser cooling of individual atoms, first illustrated at NIST in 1978 and now extensively employed in applications like atomic clocks.

The latest NIST study adds a new twist – the use of squeezed light to drive the drum circuit. Squeezing is a quantum mechanical concept in which noise or unwanted fluctuations is moved from a useful property of light to another aspect that does not affect the study. Such quantum fluctuations limit the lowest temperatures that can be reached with basic conserving methods.