Here to make a IR remote control I am using an ASIC codec chip ST12 where codec means coder decoder. That means same chip is used as encoder at transmitter side and as decoder at receiver side. It’s very nice chip and some of the major features of the chip are

The major applications of this chip: 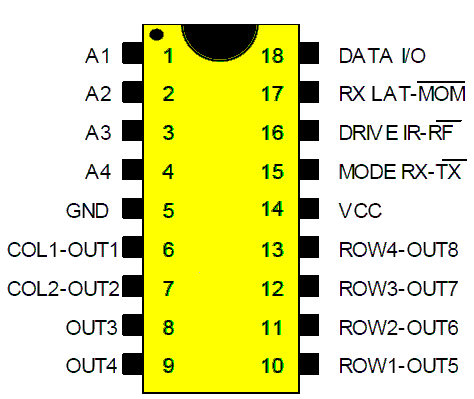 As shown in above figure its 18 pin chip with DIP. Pals refer the table given below for details

So now after going through above table one should have complete idea about the operation of this chip as transmitter (encoder) and as receiver (decoder).

Transmitter: – The major advantage of this chip is that there is least requirement of external components

As shown in Circuit Tab 1 along with ST14 we require 8 push button switches, one LED with current limiting register and an ASK transmitter

Connection: – All four address bits A0 – A3 are shorted to ground to setup an address 0000. 8 push button type switches are connected in row-column (4×2) structure as shown. The transmit data pin drives red LED with 330E resistor and also connected with data i/p of 433 MHz ASK Tx. IR-RF pin is connected to Gnd to configure the chip in RF mode. Mode Rx-Tx pin is also connected with Gnd to configure it as transmitter. A 3V battery (or 2 dry cell) provides power to the circuit.

Operation: – When any of the key is pressed data is transmitted via transmit data pin. The address and data together given to ASK transmitter that will modulate it at 433 MHz freq. This data transmission can be seen on red LED as blinking o/p.

Connections: – All four address bits A0-A3 are connected to ground to setup same address 0000. Keeping first data o/p D0 unconnected, rest all D1 – D7 are connected to input of ULN chip. Each one output of ULN chip drives one relay and one LED. So total there are seven relays that can switch on / off 7 different devices (instead of ULN2003 if one uses ULN2803 then all 8 data outputs can be used). The mode Rx-Tx pin is connected to Vcc to configure the chip as receiver. The lat-mom pin is tied to Vcc to get toggle output every time. The output of 433 MHz ASK Rx is connected to receive data pin of ST14. Two different regulated supplies 5V and 12 V are used to give power to complete circuit.

Operation: – The 433 MHz ASK Rx will detect the carrier signal and demodulate the address and data and give it to ST14. On getting valid address and data st14 will latch the data on D0-D7. Because its toggle output every time when same switch is pressed from TX, the relay will switch on / off. Also relay on / off is indicated by respective LED.