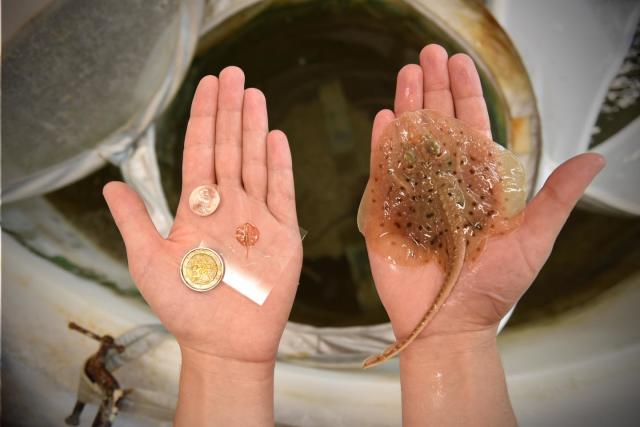 The idea of engineered life can be a little discomforting for some people but none can overlook its impact on them. By this point,here, we are referring to the biohybrid ray. The motion of robot here mirrors the movements of ray, a batoid fish that swims in water using wave-like motion of fins extending the movement across the length of its body. Overall, its movement is a graceful and an efficient one.

The robot inspired from this fish measured some 16mm in width and a stiff gold skeleton that helps in storage of elastic energy. This basic structure get wrapped under 200,000 cardiomyocyte rat cells. These cells have been modified genetically to contract on exposure to light. The cells are arranged in a serpentine pattern that run down to the robot’s underside. These help the robot move in form of an undulating wave whenever light rays strike its surface. The resulting movement is very much similar to the batoid fish. The minimum amount of light used for controlling this robot permits individual sides to function independently helping the robot twist and turn in presence of obstacles.

The ray robot needs nutrients water to keep the engineered rat cells alive which brings us to the most vital question – is it alive? Kevin Kit Parker from Harvard based Diseases Biophysics Group led this research and as per him,”I think we’ve got a biological life-form here. A machine, but a biological life form. I wouldn’t call it an organism, because it can’t reproduce, but it certainly is alive.”

In the direct world, this ray-bot may not have much usefulness as it is incapable of swimming outside its water and nil immunity power to keep its cells from infection or dying. But the project is a crucial one for the Bioengineering world. The team at Harvard working on this project aims to take their learnings to create an artificial heart in near future. The experiments fuses robotics with bioengineering and we can expect to see larger biomechanical robots in coming days.

Just imagine what can be accomplished with a few fish cells, a bit of gold, and silicone. Add a small computer to it and it becomes completely autonomous.It will be a step further towards synthetic cognition that will be a bigger support for humanity. You can consider the ray-bot as one of the prime ancestors of upcoming evolved generations of these animals.