Continue to Site
Introduction
The first thing we need to understand is that what is servomechanism?
Servomechanism means generating error output as a difference between output feedback and control input and reduces this error until it becomes zero – that means
• when the system reaches the desired state
• when the system produces the desired output
It is widely used in
1. Industrial applications – flat belt, motion control, load positioning, close loop control systems
2. Defense applications – gun barrel positioning, target tracking, and monitoring, guidance systems of missile or smart bomb
3. Automobile applications – automated guided vehicles (AGV), unmanned guided vehicles (UGV)
4. Aeronautic application – fly by wire system, unmanned air vehicle (UAV)
5. Power and voltage regulator applications – voltage regulator
6. Satellite application – satellite tracking
We can list out numerous such applications.
Let us understand one fascinating application in brief.
Gun barrel position system
This is one of the most required systems for the tank, anti-aircraft gun, ground base missile launcher, or howitzer. Once the target is locked in all such systems, the gun should always point to the target until the shell (bomb or missile) is fired. The target is moving (like a tank or aircraft), so according to its moving position, the gun should also automatically move. The gun movement depends on the difference generated due to the target’s previous position and current position. And finally, due to accurate calculation, the bomb is fired that always hits the bull’s eye.
I have discussed another such application: Automatic 2 dimensional (2D) angle (position) control for satellite dish antenna.
Automatic positioning of satellite dish antenna
The dish antenna should always point to a satellite in space to receive maximum signal. A slight deviation may also reduce signal strength. The antenna position is fixed by setting two angles (1) azimuth angle (2) elevation angle. These are set by entering their values. Once these values are entered, the dish antenna moves in the horizontal and vertical direction using 2 DC gear motors, one for each direction (angle). As it moves in either direction, the deviation between the desired position and current position gives an error fed back as an input. The position is sensed using two RVDTs (Rotary variable differential Transformer), one for each direction. 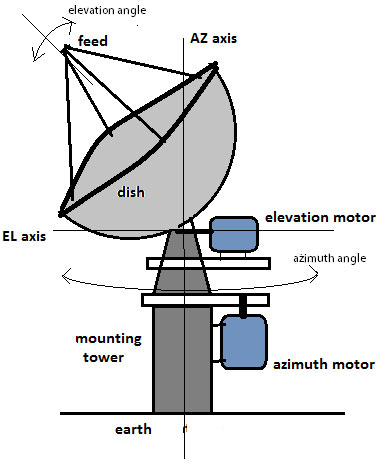 The above figure shows a diagram of the system. The azimuth motor (AZ motor) and elevation motor (EL motor) are shown. The sensors are attached with shafts of the antenna as the dish antenna changes its position, the analog output from the sensor changes.
Once the sensor position matches the entered position in terms of azimuth angle and elevation angle, both the motors stop rotating. Afterward, if there is any deviation in the antenna position due to any circumstances, it automatically reaches the desired position using motors. If we want to change the antenna position (maybe to track other satellite), then we change azimuth angle and elevation angle, and again, the antenna moves to a new modified position.
This is the description of the actual system. It consists of big and heavy motors that can take the load, and the rotate dish antenna of size varies from 3 to 15 meters. The RVDT is chosen (or even custom made) as per the antenna’s desired degree of rotation. It gives corresponding analog voltage output as per the position of antenna changes. The entire system is precisely calibrated for RVDT output as per antenna angle position in both dimensions.
For example, consider the RVDT has an angular range of -45o to +45o, and corresponding analog output is 0 to 5 V. That means for 90o change in angle, the voltage change variation is 5V. So for each degree change in angle the output voltage changes by 5 / 90 = 0.055  = 55 mV (approx.). If this RVDT is used in a system such a way that as the antenna moves from 0o to 90o, it gives the output as 0 to 5 V, then every degree change in antenna position sensed as ±55 mV change in voltage output. The control system senses this voltage and generates signals to drive motors. The motors and corresponding gear mechanism is also designed to rotate the antenna in the range from 0o to 90o (or 180o or even more) in the step of 1o in both dimensions. Generally, the elevation angle range is from 0o to 90o, and the azimuth angle range may be 0o to 180o or even completely 360o.
This is how the actual system is designed, and it works. But here, I have discussed the demonstration of such a system.
Demonstration model:-
The figure shows the arrangement for the system. There are two motors. Both motors are DC gear motor of 12 V with 10 RPM speed. The motor that rotates dish in the horizontal plane is known as azimuth motor, and another motor rotates it in a vertical plane that is elevation motor. Two opto-interrupt sensors are used to provide feedback of motor angular position. It uses an encoding wheel that is attached to the shaft of each motor. The encoding wheel has holes (slots) at 10o, 20o, 30o, likewise. The arrangement is made so that as the motor rotates, the wheel also rotates; its holes pass through the sensor’s gap and generates one pulse. That means the sensor generates one pulse per 10o of motor rotation. The figure itself describes how the entire arrangement is made, although let me discuss it step by step.
• Entire system is set up on a wooden box that is housing for the circuit and serves as a base or platform for the entire mechanism.
• 1st DC motor (azimuth motor) is fixed inside a wooden box using bolt and screws. The encoding wheel (azimuth wheel) is attached with its shaft as shown
• MOC7811 sensor 1 (Azimuth sensor) is also mounted vertically using a small wooden stand on the same wooden platform such a way that the holes of the azimuth encoding wheel pass through the gap of the sensor
• A U shape metal strip of around 2 inches wide is directly welded with the shaft of DC motor. one side of U shape is quite long for others, as shown.
• This strip is used to mount 2nd DC motor and another sensor. 2nd DC motor (elevation motor) is mounted on U-strip using mounting clamp and screws on the shorter side while sensor 2 (elevation sensor) is fixed at the end of the long arm (side) 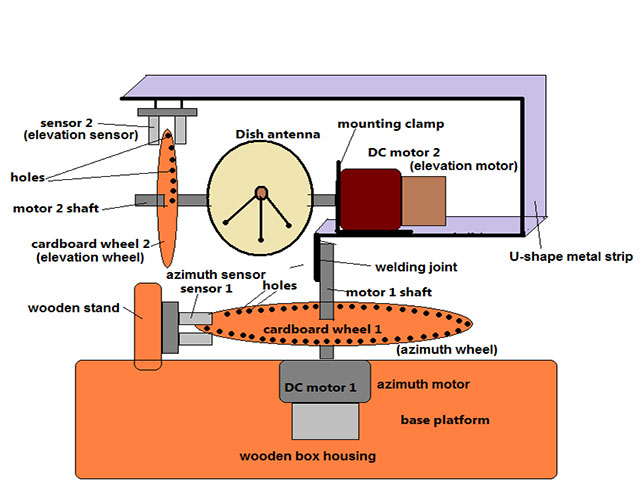 • A dish (made up of cardboard and aluminum foil) is directly fixed with the shaft of this motor 2. 2nd Encoding wheel (elevation wheel) is also attached at the end of motor 2 shaft as shown
• This wheel and elevation sensor are again fixed in such a way that the holes of the wheel pass through the gap of the sensor
Here is the snap of the model. 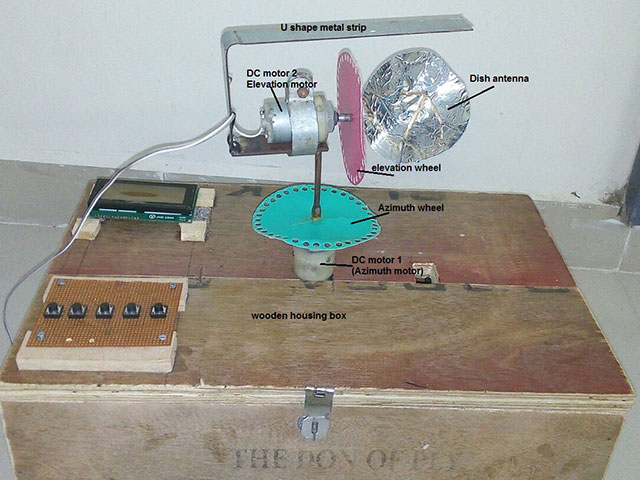 Working of demonstration model: –
• Initially, the angle of both motors is set to 0o on the encoding wheel. Means dish antenna has 0o azimuth angle and 0o elevation angle
• The azimuth angle can be set from 0o to 350o in the step of 10o. The user can set the desired angle using pushbuttons
• Next, the user has to set an elevation angle. It can be set from 0o to 70o in the step of 10o using pushbuttons
• When both angles are set, the user presses another push button to rotate the dish
• As the button is pressed, the azimuth motor starts rotating to set azimuth angle. As the motor rotates, the encoding wheel also rotates, and its holes pass through the sensor gap. The sensor generates pulses that give feedback on the motor’s angular position. The motor rotates till the set angle and the motor actual rotation angle becomes equal. If the set angle is more than the actual motor angle, then the motor rotates CW direction, and if the set angle is less, the motor rotates CCW direction
• Next elevation motor starts rotating. It rotates dish as well as 2nd encoding wheel. Again motor rotates till the set angle and the motor actual rotation angle becomes equal. It also rotates CW or CCW as per the set angle is more or less than the actual angle
• Thus, the dish antenna attains the desire angular position in azimuth and elevation planes
Hardware
As shown in the figure, the circuit is build using sensors MOC7811, motor driver chip L293D, 20×4 LCD, and microcontroller ATMega16.
• Sensor circuits are built around MOC7811. Both sensor circuits are identical. Internal IR LED is given 5 V supply through a current limiting resistor of 33,0E, and the phototransistor is connected in switch configuration using external 1K resistor. The final output of the sensor circuit is through the collector of the phototransistor
• Both sensor outputs are connected to external interrupt pins PD2 and PD3 of ATMega16.
• PORTA pins PA0 to PA4 are connected to ground through resistor network (5 resistors of 1K). Five pushbuttons are connected with these pins such that when the button is pressed, logic 1 is given as input. The rest of the pins of PORTA are connected with Vcc
• PORTC drives LCD data pins D0 – D7. Two control pins Rs and En or LCD are connected with PORTB pins PB4 and PB5, respectively. RW pin of LCD is connected to ground to make it write enable
• PORTB pins PB0 – PB3 drives 2 DC motors through the L293D chip. These pins are connected to the input of L293D, and two motors are connected with outputs of L293D
• A 16 MHz crystal is connected to crystal input pins of ATMega16. Two 22pf capacitors are connected for biasing and stability of the crystal
• Reset button connected as shown with reset input pin to provide a manual reset to the microcontroller
Operation: –
• Initially LCD shows set AZ angle and set EL angle as 0o. It also shows the current AZ angle and EL angle as 0o.
• User has to set the AZ angle and EL angle by pressing AZ angle inc/dec buttons and EL angle inc/dec buttons
• Whenever a button is pressed, the angle is changed by 10o
• After setting angles to rotate, the dish button is pressed. Both motors rotate one by one till the dish antenna angles match with set azimuth angle and elevation angle
Software
• Software is written in C language
• Compiled using AVR studio 4
• Tested using AVR simulatro1 for ATmega16 device (available with AVR studio 4)