Save Power Consumption with PIR sensor and Arduino

In one of the blog of Electromania, an easygoing approach is demonstrated where the power consumption for ATMEGA 328Pwhich is based on Arduino boards, is reduced to around 60-70%. In this project, differences in power consumption are investigated, of PIR sensor module and Arduino nano. The aim of this investigation is to understand the process that how Pyroelectric/Passive Infrared (PIR) motion sensor is interfaced with Arduino or any microcontroller. 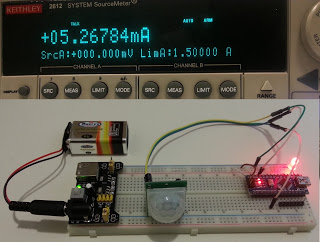 This will also comprehend the procedure to detect output of PIR sensor by using Interrupts of Arduino boards. Further, it will explanation that hoe batter life is extended and power consumption is reduced, when Arduino nano is put into deep sleep or hibernation and motion is not detected by PIR sensor.

In general, PIR sensors are used in Automatic doors or lights, surveillance cameras, toys, night lamps, automatic cameras etc. and can be easily detected due to their structure as they have typical hemispherical dome with honeycomb like small facets all around its body. In this project, PIR sensor is used for producing electronic signal output, when it detects any human/animal movement.

These sensors are built with a capacity to perceive miniscule changes in surrounding temperature as they detect Infrared radiations emitted from our body. The pyroelectric material used in the sensor, generates temporary electrical voltage which depends on variations in temperature.

Hence, they do not consume energy for detection purpose but capture energy discharged from bodies and this property makes PIR sensors useful in many diverse applications. In such scenario, sensors related to mechanical, magnetic or light cannot be used.
The connection diagram is available in the form of circuit diagram. The functionality of Arduino is used to read PIR sensor output. The hardware interrupts of Arduino, helps to perform its job on regular basis even during hibernation until some signal is received at its interrupt pins. This process helps in reducing power consumption of Arduino and sensor system.
For this project, you will need PIR sensor, Arduino Nano, Breadboard or PCB, Power supply, jumper wires, LED or relay to connect to output pin etc. To understand the complete procedure along with the video and component description, follow the following link
Filed Under: Reviews