Continue to Site
“Preparing a full-colour updatable volumetric display is limiting because many 3-dimensional pixels, or voxels, with distinct colours have to be formed to make volumetric graphics,” says Kota Kumagai, lead author of the study. “In our display, the microbubble voxels are 3-dimensionally generated in a liquid employing focussed femtosecond laser pulses. The bubble graphics can be coloured by altering the colour of the illumination light.”
Although the novel work is a proof of concept, the technology might one day enable full-colour updatable volumetric displays. Such sorts of displays could be employed for museum or art exhibits, where viewers can walk all the way around the display. They are also being explored for assisting doctors visualize an anatomy of patient prior to surgery or to let the military study terrain and buildings prior to a mission.
“The volumetric bubble display is most ideal for public facilities like an aquarium or museum because, presently, the system setup is expensive and big,” says Kumagai. “But, in the future, we expect to enhance the cost and size of the laser source and optical devices to prepare a smaller system that may be affordable for personal use.” 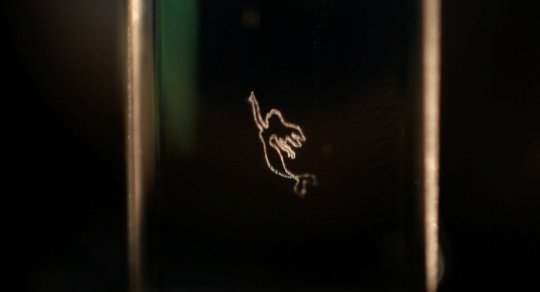 The bubbles for the novel display are prepared by a procedure known as multiphoton absorption that occurs when multiple photons from a femtosecond laser are absorbed at the point where the light is emphasized. Multiphoton absorption enabled the scientists to create microbubbles at very accurate locations by moving the focus of the laser light to numerous parts of a liquid-filled cuvette that acted as a ‘screen.’ Using a high-viscosity, or thick, liquid prevents the bubbles, once formed, from immediately rising to the top of the liquid.
The bubble graphics are viewable when they scatter light from an external source of light like halogen lamp of high-power LED. The scientists produced monochromatic images in red, white, green, and blue by switching the colour of the illuminating LED. They say that illuminating the graphics with a projector could prepare distinct colours in distinct regions of the image.
Rather than preparing each bubble one by one, the scientists employed a computer-generated hologram to form 3D patterns of laser light that let them control the shapes and number of the microbubble voxels. This method also enhanced the volume of light scattered from the microbubbles, making the images brighter. The scientists are now introducing a system that would use a stream inside the liquid to burst the bubbles, enabling the image to be cleared or altered. They are also working on techniques that could enable the formation or bigger graphics that needs overcoming spherical aberrations caused by the refractive index mismatch between the liquid screens.
Filed Under: News
Tagged With: Research