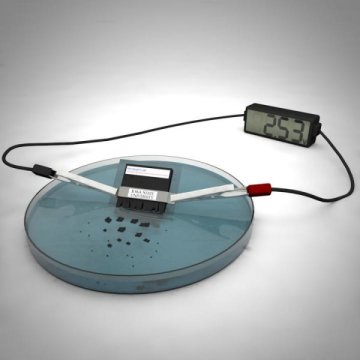 Making such gadgets possible is the aim of a considerably novel field of study known as ‘transient electronics.’ Such gadgets could perform numerous functions. An assistant lecturer of mechanical engineering at the Iowa State University in Reza Montazami and also a collaborator of the U.S. Department of Energy Laboratory Ames have been functioning on transient based technology for over the years.

The newest development from their laboratory is this self-destructing battery made of lithium-ion that is proficient of releasing 2.5 volts and dissipating in a couple of minutes when immersed in water. The battery can even support a desktop calculator for almost 15 minutes.

Montazami says it is the foremost transient battery to illustrate the stability, power and shelf life for optimal use. The members of the panel team are Nastaran Hashemi, an associate lecturer of mechanical engineering; Reihaneh Jamshidi, a graduate student; Simge Cinar, a postdoctoral scientist and Emma Gallegos, an undergraduate student.

The research was sponsored by the Presidential Initiative for Interdisciplinary Research Department of Iowa State and the department of mechanical engineering. “Besides the traditional electrical that are crafted to function for a wide array of time, a unique and key feature of transient electrical is to function over a normally short and well-delineated session, and undergo rapid and precisely, complete self-destruction and disappear when transiency is augmented,” the researchers explained.

The previous work done by Montazami involved electrical printed on a sole layer of a degradable polymer composite. The newly invented transient battery is introduced after hard work of eight years. It consists a cathode, an electrolyte, and an anode. All such components are encompassed in two coatings of a polyvinyl alcohol-based polymer.

The battery is extremely small, almost 1 mm thick; 5 mm long and 6mm wide. Montazami says that the elements of battery, electrochemical reactions and structure are all much related near commercially introduced battery technology.

But, when water is dropped into it, the polymer tends to swell and finally breaks into parts and gets dissolved. Montazami is an efficient and rapid way to exhibit that the battery does not vanish completely. It is because the battery includes certain nanoparticles that do not vanish, but they do get mixed with water. Such process is termed as ‘physical-chemical hybrid transiency’ by Montazami.

Even though batteries had to release voltage just like commercial batteries because numerous gadgets would not function if the voltage is unsteady or low. Also, the batteries need numerous coatings and an intricate structure. And structuring the batteries was troubling and needed recurring attempts. Montazami said, “It was quite challenging materials trouble, and the issue is that there are not many groups performing on such projects.”