Raspberry Pi and Trinket have been working together from quite some time to bring forth a web-based emulator for Sense HAT. For those who are unaware, Sense HAT is a multipurpose add-on board meant for Raspberry Pi which is also the central component for Astro Pi units in the International Space Station (ISS). The prime objective of the maker was to offer an ideal, free of cost learning resource that pulls up spirits of students, technicians, and teachers pursuing space-qualified hardware programming. The team recently released the programme and you can try it by executing the “Run” button. 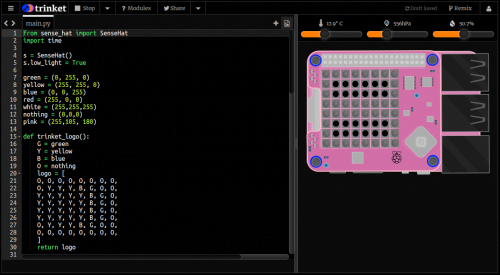 The emulator will help more and more people become part of the upcoming Astro Pi competition by owning just a Raspberry Pi system or a Sense HAT. The new emulator built over the latest Python-in- browser platform has a number of noteworthy features which include full Python syntax highlighting, HTML page embedding, support for all prime internet browsers, project downloading in ZIP format, direct URLs for project sharing, integration with social media, image uploading, intuitive error reporting as well as highlighting, contextual auto-completion, and so forth.

The Sense HAT also comes with humidity, pressure, and temperature sensors that can compel it to modify its behaviour with respect to changing climate.the Sense HAT comes with sliders that can modify or change the values that help you in testing the response of your code to environmental variables. Code defined by these emulators can be ported directly to a physical Raspberry Pi without any modification to the Sense HAT. This directly means that the code you ever write can be executed by Astro Pi units that are on board at ISS.