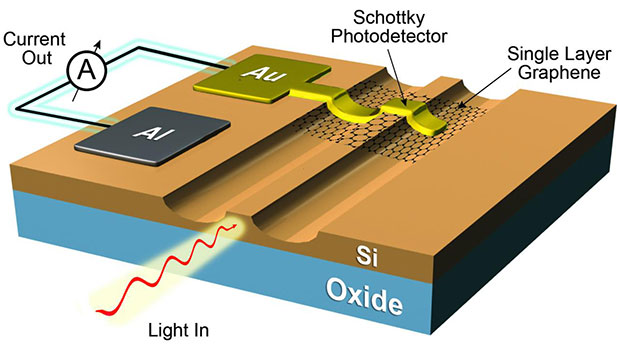 Lack of an intrinsic band gap is a big weakness of the graphene that has made it experience numerous challenges in the domain of digital logic. But, it is the only weakness that has captured the attention of numerous researchers for identifying its utilization in optoelectronics. Such absence of a band gap makes graphene an exciting broadband absorber, allowing photo detection for infrared, visible and terahertz frequencies.

Now, in a present report performed by the European Commission’s 10 yearlong project, the Graphene Flagship, a team of universities – comprising the University of Cambridge in the UK, the Hebrew University in Israel and John Hopkins University in the United States – has proficiently pooled with silicon on a chip to create “high – responsiveness” Schottky barricade photo detectors.

Such photo detectors are created by a junction between a semiconductor and metal. Since photodetectors are a core building unit of optoelectronic links, the result of this work could result in far less energy being absorbed to produce and move information, which is a crucial achievement in identifying the efficiency off the Internet of Things, says the scientists.

In a research work stated in the journal Nano Letters, the graphene based photo detectors acquire a responsiveness of 0.37 ampere of current per Watt of instance light on the photodiode utilizing 1.55 micrometer light. Such high responsiveness is analogous to that of the silicon germanium detectors presently used in photonics made of silicon.

While the photo detectors based on silicon can perform the job for identifying visible light, they fall short when it is about identifying near-infrared radiation (NIR). The main purpose for this is that the energy of NIR photons at telecom wavelengths is not powerful enough to link the band gap based on silicon. For such reason, photo detectors have been fashioned out of a combination of germanium and silicon that needs an intricate and comparatively expensive creation procedure. Such novel graphene-silicon link could be far cheaper and simpler to produce.

“It is a significant discovery that proves that graphene can compete with the present state of the art by creating devices that can be crafted more simply, cost-effectively and work at varying wavelengths,” says Andrea Ferrari, a lecturer at the University of Cambridge’s Graphene Centre. “So paving the path for graphene incorporated silicon photonics.”

As far as accomplishing the goal of utilizing less energy, Ferrari considers this most recent work as a vital achievement. “Graphene can combat current silicon photonic technology in the way of energy consumption,” says he.

For optical communications for Internet of Things, “It is an initial step towards it and we intend to reach wafer-scale integration and work-packages of optoelectronics of the Flagship is to make Ideally this happen in the coming two years,” says Ilya Goykhman of the University of Cambridge.

Ferrari also stated, “We have revealed the potential for the detector but we are also required to generate a modulator based on graphene to have low energy, full, optical telecommunication unit, and the Flagship is performing hard on this issue.”