This article is about a simple remote controlled robot car which emphasizes majorly on mechanical design and some basic circuitry. By the word simple I mean, a robot so simple that is not only wireless in nature, it doesn’t have an embedded computer even that is microcontroller in it. The objective of this RC robot car is to understand the interface of the commercially available RF transmitter. It also aims to learn the receiver module coupled with HT12E and HT12D pair that is Encoder and Decoder respectively to transfer data over the air to the motors in the robot car.

Since the making of robot car is simple, so are their components. All of the hardware stuffs required here are easily available including castor wheels, L-clamps, DC motor, chassis etc. For electronics section, apart from resistors and capacitors, all you need is RF transmitter and receiver, motor drive, encoder/decoder and other basic supply of tools and stuffs. Everything is available in local electronic store.

Working of the robot car

The working logic of the robot car includes the basic idea of the RC car and its working logic that is involved in the car. Basically, two blocks that is Transmitter or the remote control and the Receiver or robot car is all you need to understand. To start with the transmitter section, you have DPDT switches that gives digital inputs to the encoder IC. Then the encoder encodes the data available to them and sends it to the RF Transmitter module. While on the receiver side, the RF Receiver receives the encoded data and passes it to the decoder. Finally, the decoder decodes the data and sends it to the motor driver IC to drive the motors.

Next you need to understand data sheets and how it is accessed for the components that you are using. For beginners, data sheet is a document, provided by the manufacturer for better understanding of components and their behavior. It is easily available on internet, all you have to find links to the datasheet and the components.

The tough part is to read and understand the data sheet and find out what you are actually looking for. It is a skill that any electronics enthusiast must master and once you are done with it, you will be able to understand all the other aspect of it.

Here only one pair of motor is used to drive the car along with one castor wheels to give mechanical stability to the car. Among all the different types of drive algorithms for driving robotic cars, you have to be well versed with differential drive method. In order to change the direction of the car with only two wheels, understanding of algorithm is important. Control over the direction of the car is achieved by rotating one of the wheels in one direction and the other in another direction. For example, if the car goes front or back, both pair of motors will operate in one direction and if it goes left or right, they operate in different directions.

RF Transmitter and Receiver Module comes in different variety, so it is completely fine if you have a different model. All you have to care about the numbering because some modules have inverted numbering, like first pin will be last pin and second pin will be second from last and so on.

Now it’s time to make RF transmitter that is remote control. While making transmitter circuit, keep in mind that you are building a remote control which obviously should be handy and not much heavy. For the circuit, you require HT12E encoder which have 8 address bits and 4 data bits. The address bits can left open or pulled low and are connected to a switch in the circuit. It means that if the switch is ON then that line is connected to GND otherwise the pin is left floating. The transmit enable is an active low input to the IC which enables the transmission. In this project, RC robot car connects TE directly to GND as to keep sending data when they arrive to the RC car. The circuit can be powered with a 9V battery

For RF receiver with motor driver, the address pin in the decoder HT12D behaves same as encoder. The decoded data is send as control signals to the motor driver IC. L293d a dual H-bridge motor driver is used to drive the motor in both forward and back ward direction.

The valid transmit pin is used to indicate if a valid transmission between the encoder and decoder is being established or not. This pin can be left open or like in the circuit below, an LED with series resistance can be used to give a visual indication.

And you are done with the project. It is possible to encounter problems during RF Transmission and Reception section. But overall, it is a nice attempt for beginners to give a try on robotics and its basics. 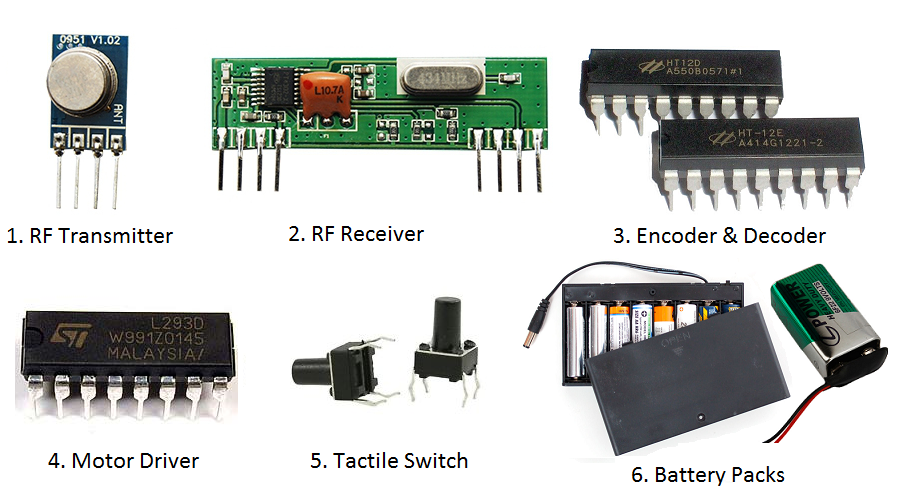