In a case study of the efficiency of the conference room, performed by Liang Z. Zhang, who is an application engineer at Intel® platform, has provided an innovative method to build a Smart Conference System. He has used and utilized ZigBee on the Intel® Edison Platform to bring out the maximum efficiency of a conference room.

In order to resolve those problems, a Smart Conference Room System (SCR System) is developed, which positions the Intel® Edison board, Arduino expansion board, Android* Smartphone, push server, and ZigBee sensors. This system can examine real-time environmental situations where it detects person present in this room and then notify the push server to reschedule and use conference room space efficiently and conveniently.

Based on the IEEE, ZigBee provides a specification for high-level communication protocols which is used to develop personal area networks and is built from small, low-power digital radios. They are rooted with those applications that require low power consumption and can also tolerate low data rates and hence use small amounts of power. 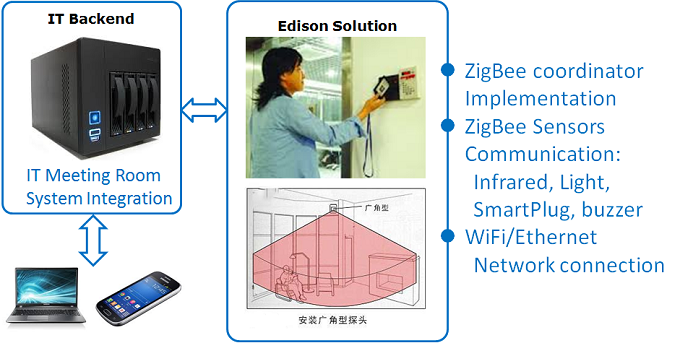 The service of Zigbee is used in home automation like smart occupancy sensor, smart lighting, and temperature control and to use zigbee in individual devices, they must have a battery life of at least two years. Next Arduino, which is an open source computer hardware and Software Company that designs and manufactures microcontroller-based kits. It is also as standard connectors to connect the CPU board with interchangeable add-on modules/ shields.

The SCR system although efficient in functionality, faces some challenges in both the stack and SCR System. The limit function and API of the stack along with SCR System, the stability of the system are some of the hurdles being faced by the developers and therefore, it is open for further modification.

Check out the complete details and functions of SCR system in the following link.