There are many different types of robot projects that you might be aware of including the following:

This article also describes a robot whose distinct feature is in its name. It’s an omnidirectional robot meaning it can move in any of the eight directions, as well as forward-reverse-left-right—as shown in the figure, with the ability to rotate clockwise and counterclockwise on its central axis. 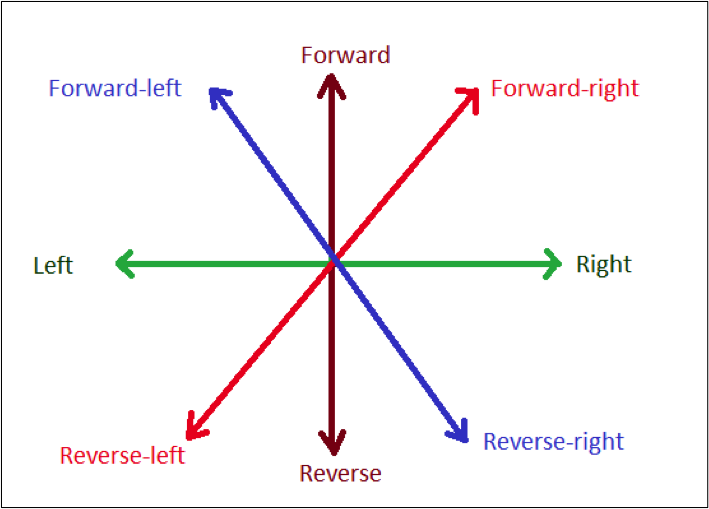 This unique feature of such a robot finds its applications in many different fields, including:

This article describes the design and development of an omnidirectional robot. The robot is built using particular types of wheels known as mecanum wheels (popularly known as omnidirectional wheels), Arduino NANO board, and DC gear motors. A smartphone controls the robot through Bluetooth. 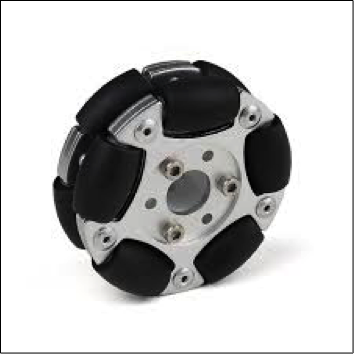 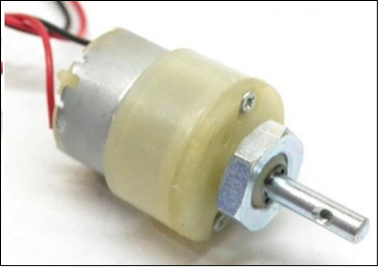 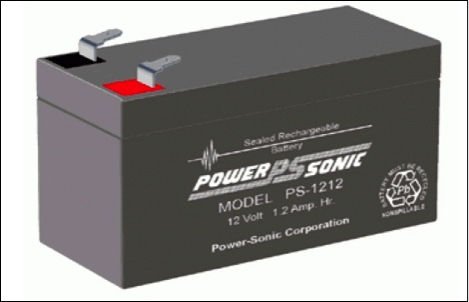 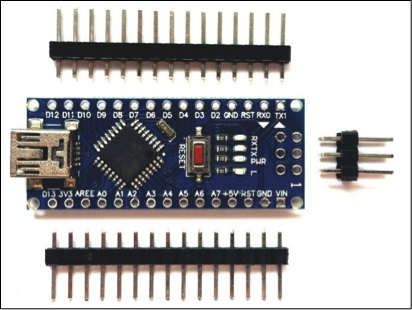 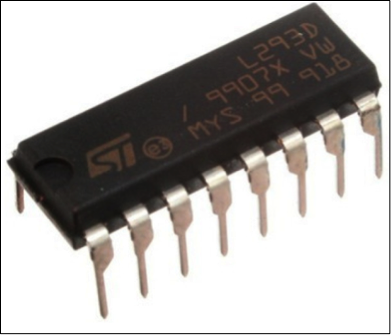 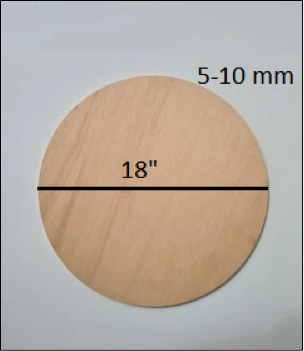 First, we’ll see how to build a robot, and then we shall build the circuit 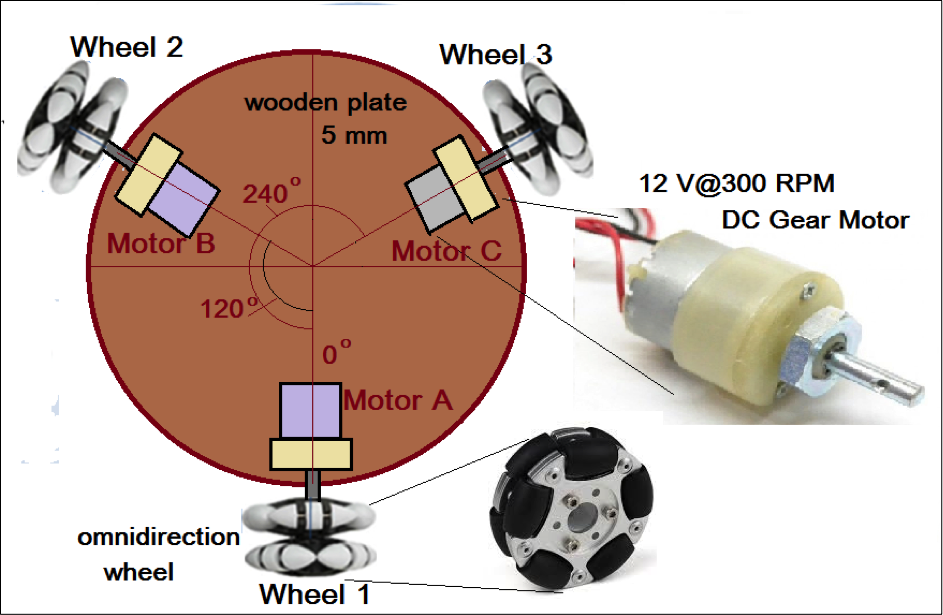 The figure shows that the robot is like a round wooden plate with three omnidirectional wheels attached to three different DC motor shafts, which are fixed to the bottom side of the wooden plate using clamps at a specific angle.

All three motors are fixed at an angle of 120o apart from each other. Omnidirectional wheels are attached to the DC motor shaft directly using a given screw in the motor shaft. Now, our omnidirectional robot is ready— and ready to move in any direction.

How can this simple round plate type robot with three motors and three wheels move in any direction? The figure below explains the robot movement in six different directions and its clockwise and counterclockwise rotations in eight different figure sections. 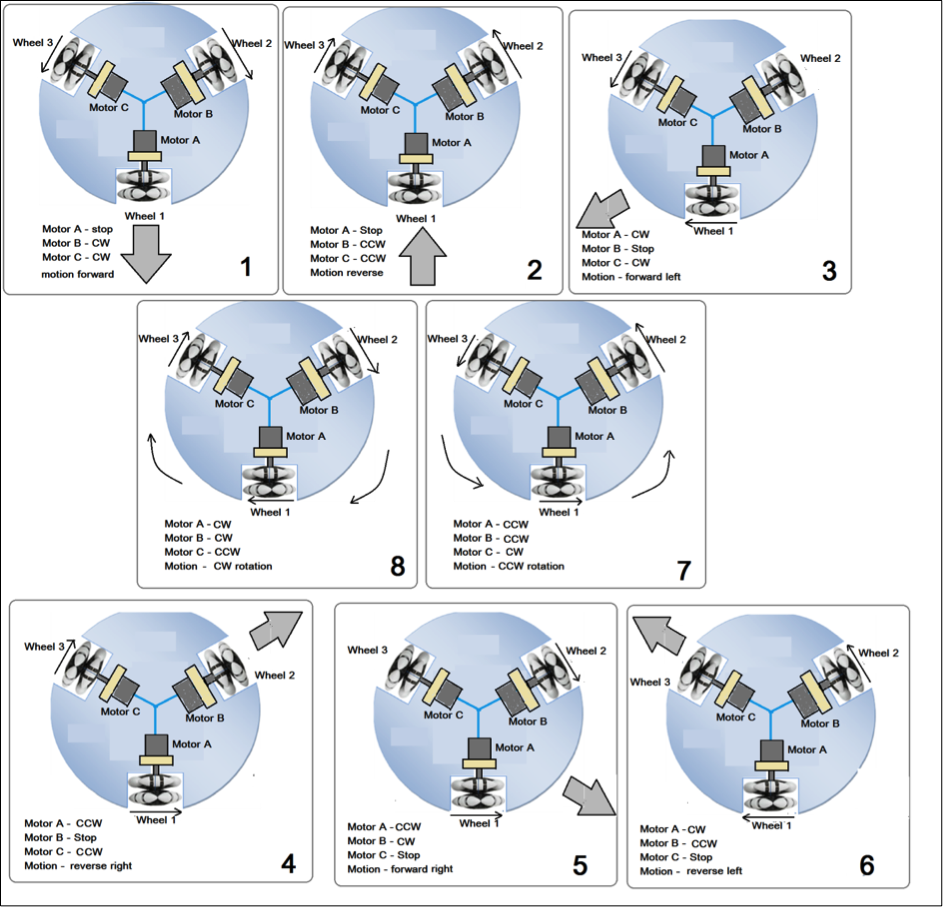 For example, as shown in figure section 1, when motor A is stopped, and motor B and motor C rotate clockwise (CW), the robot moves forward because the omnidirectional wheel attached with motor A will give free movement.

Similarly, as shown in section 2, the robot moves reverse by keeping motor A stop and rotating motor B and C counterclockwise (CCW).

Thus by keeping any one motor stop and rotating the other two motors, we can move the robot forward-left, reverse-right, forward-right, and reverse-left. This is shown in sections 3, 4, 5 and 6.

Now let us move on to the next stage and build the circuit that will rotate these three motors, CW (forward) and CCW (reverse), as per the desired robot movement 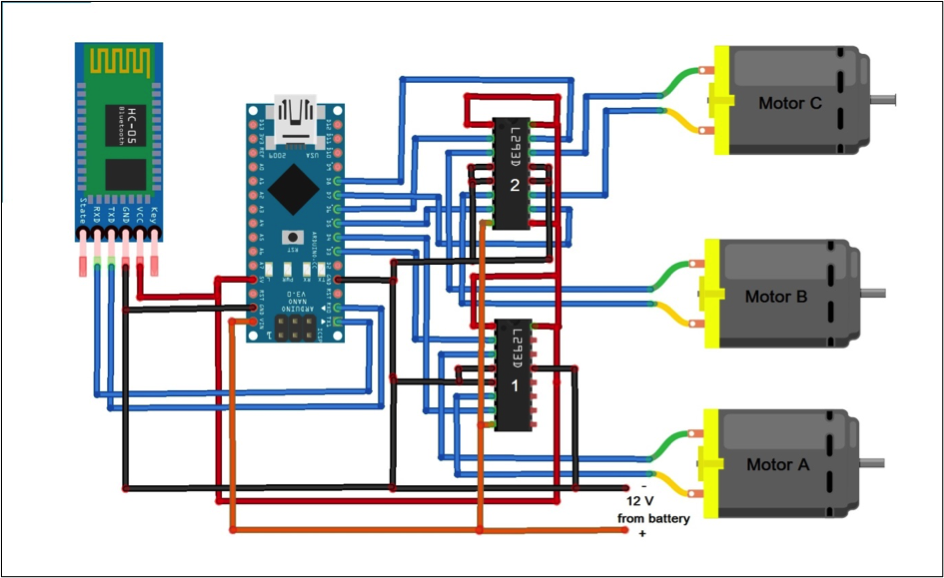 As shown in the figure, the circuit is built using only three components: Arduino NANO development board, Bluetooth module HC05, and motor driver chips L293D.

This circuit can be easily built on a general-purpose PCB or even on a breadboard.

Here is the snapshot of the robot with the circuit. 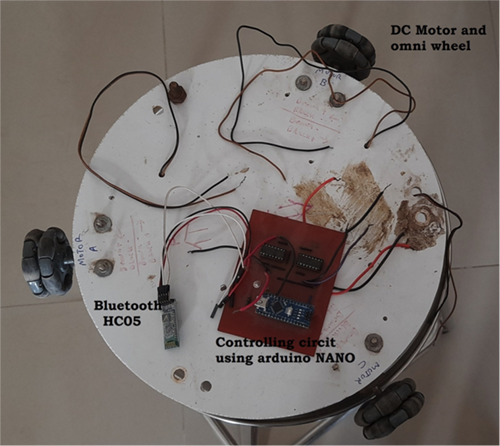 How to control robot motion (movement)

The robot movements depend on the software program downloaded into the Arduino board microcontroller, ATMega328. The circuit and the robot’s complete working and operation are as per the software program. Robots move for one or two seconds and stop automatically. To move the robot, the user has to use a smartphone as a joystick.

Now, let us see this software program that is downloaded into internal FLASH of Arduino board microcontroller (ATMega328)

The AATMega328 performs the following tasks per the programming:

The program is written in C/C++ language using Arduino IDE software. It is also compiled and uploaded into Arduino board micro-controller using the same software

Here is the program.

Here is the youtube video link for this project