Continue to Site
A team of scientists at the Rice University is these days smashing metalling micro-cubes to make them super strong and toughen their texture by rearranging their nanostructure. The team also reported that firing up almost perfect, tiny silver cubes over hard surfaced targets will turn their single-crystal microstructure into gradient-nano-grained structures (GNG). The prime purpose of this experiment was to observe and learn how a specific material deforms under high stress, something similar might be experienced by a bulletproof vest or a small spacecraft that has micrometeorites. The researchers believe in creation of a gradient nanostructure inside material atoms through deformation increases their ductility and reduces the chances of their catastrophic failure under overwhelming stress. 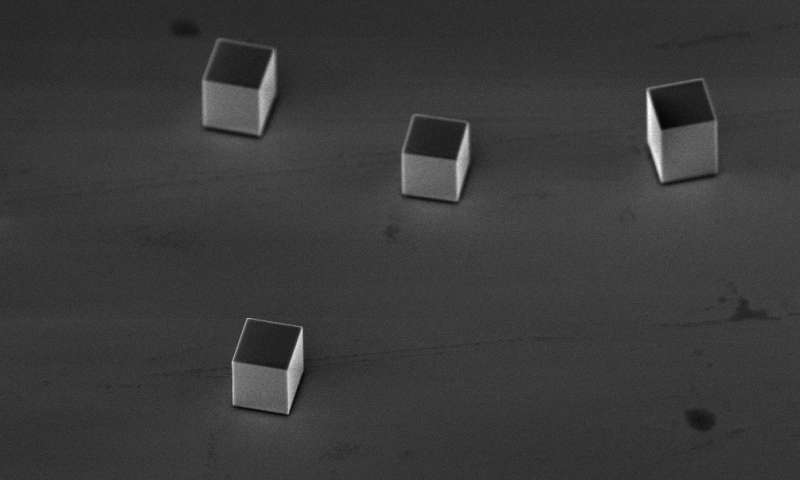 They wish to develop nano-grained metals that are stronger and tougher than every other thing that is available these days. The research was led by Edwin Thomas, a material scientists, Stephanie Sick Dean and William from Rice’s George R.Brown School of Engineering. The team utilized a highly developed laser-induced projectile impact test rig to project microcubes over a silicon target. This process allowed them be assure the cube hit target perfectly. The Thomas lab had developed this technique couple of years ago for firing micro-bullets in order examine the strength of graphene and polymer based film materials. This time, they included the bullets directly in the tests.
Thomas says, “The high-velocity impact generates very high pressure that far exceeds the material’s strength. This leads to high plasticity at the impact side of the cube while the top region retains its initial structure, ultimately creating a grain-size gradient along its height.”
The original projectiles required the cubes to be as perfect as possible rising demand for a custom fabrication method. These cubes for this study were created as single crystals through bottom-up seed growth up to approx. 1.4 microns per angle, this is around 50 times less than diameter of a single strand of human hair.
Filed Under: News