SMD resistors are small rectangular shaped components with metalized areas at the ends. The metalized areas are used for soldering with the PCB. The SMD resistor has ceramic substrate on to it a metal oxide film is deposited. The thickness and length of this metal oxide film determines the value of resistance. The use of Metal oxide gives good stability and tolerance to the SMD resistors.Unlike color coded resistors, SMD resistors do not have any color bands instead they have numbers printed on it. It is difficult to identify the SMD resistor if the coding method is not known. Here describes the methods to identify the SMD Resistor.

The SMD resistors are available in different packages. Commonly available packages are 2512, 2010,1812,1210,1206,0805,0603,0402,021 etc. These packages are based on the size of the resistor ranging from 6.30×3.10 to 0.6×0.3 mm. Power rating and tolerance also vary depending on the make.
Marking system
SMD Resistor marking system is mainly used for the replacement of the resistor or fault finding. Many SMD resistors do not have marks on it so that it is difficult to identify them. But some have marks printed on the body for easy identification. There are three marking systems commonly used. 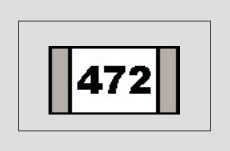 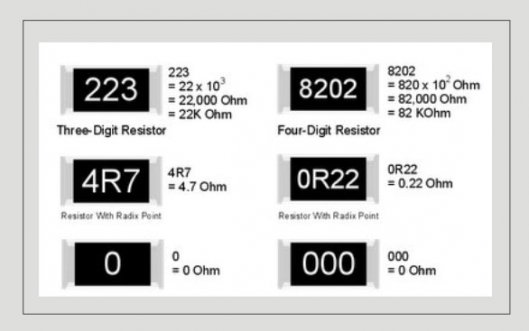