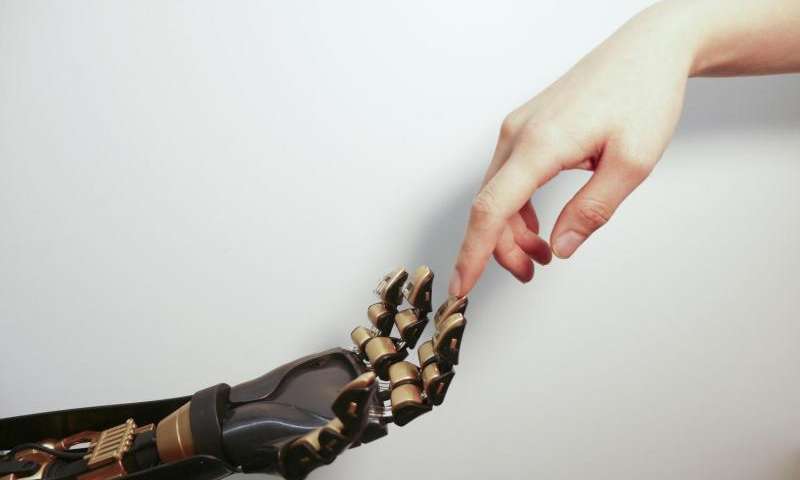 A team of engineers from Stanford recently created a new kind of plastic skin that can detect the hard the pressure is being exerted on its surface. It analyzes the hardness and then delivers the sensory input to a living brain cell. One of the professors from this University, Zhenan Bao, developed a material that mirrors natural skin’s ability to heal and flex. It also serves as a sensor net that can communicate pain, temperature, and touch signals to human brain. The professor aims to create a flexible electronic fabric etched with sensors that will form a covering over prosthetic limb. It will share a few sensory qualities with the natural skin which will help the  wearer in staying natural.

Addition of pressure point in this skin is a new addition to Bao’s original work and a step forward. These pressure points will help the wearer in distinguishing between firm grip and a light handshake. She further adds, “This is the first time a flexible, skin-like material has been able to detect pressure and also transmit a signal to a component of the nervous system.” For this project, she led a team of 17 researchers who accomplished the project.

The core of technique is a twin-ply plastic construct, the surface layer creates a sensing mechanism while the lower layer plays the role of a circuit that converts the electrical signal into biochemical stimuli and sends those to nerve cells. The surface layer in its latest version featured a pressure-detecting sensor that has almost the same range as that of human skin. It can feel all kinds of pressures right from a small finger tap to a solid handshake. It was almost five years back that this team demonstrated the use of rubbers and plastics in form of pressure sensors by estimating the natural springniness of their molecular formations.

The team dispersed billions of carbon nanotubes over the surface to take benefit of its pressure-sensing ability. Slight pressure on plastic squeezes down the nanotubes together and enables conduction of electricity. This permits the plastic sensor to replicate the human skin sensory functions and transmit information about pressure in form of small electricity pulses. The working of this one is very much similar to the Morse code that is sent to the brain. As the pressure increases, the tubes shift closer to each other allowing more electricity to flow through sensors and the varied impulses are tranmitted to brain in form of sensing mechanism.