STMicroelectronics, a global semiconductor provider serving customers across the spectrum of electronics applications, is simplifying the design and volume production of the new generation of reliable small, low-cost satellites to deliver services like earth observation and broadband internet from low-earth orbits (LEOs). 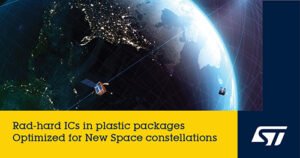 The first nine devices in this series have just been released and include a data converter, a voltage regulator, an LVDS transceiver, a line driver, and five logic gates that are used throughout systems like power generation and distribution, on-board computers, telemetry star trackers, and transceivers.

ST will continue to grow the series adding more functions in the coming months to further expand designers’ choices.

“We are in a new era of space commercialization and democratization, commonly called New Space, which radically changes the economics of conceiving, building, launching, and operating satellites,” said Marcello San Biagio, General Purpose and RF division GM, STMicroelectronics. “Our new product series brings the know-how we have amassed supporting space missions for many decades, combined with our expertise in commercial IC production, to deliver competitively priced products robust enough to withstand the challenges of the LEO environment and, in particular, meeting the requirement for radiation hardness.”