Tablet PC or Tablet computer is the small sized PC with all the features of an ordinary Desktop computer. It is named so because of its shape and size and is essentially a mini laptop. It has a rotatable touch screen and operates in Widows and Linux. The concept of Tablet PC was developed by Microsoft in 2001 and now the term Tablet is also used for small touch screen devices functions like a PC.

Tablet PC uses the same hardware as the laptop but with a pen input. Microsoft Tablets are based on Pen technology with handwriting and voice recognition capabilities. Widows XP Tablet PC edition was used to support the Pen input. Now Tablet PCs use both Widows Vista and Widows 7.Tablet PCs running in Windows have mouse input, hand writing a gesture support facilities. Some sophisticated Tablet PCs have custom dictionary to recognize vocabulary like technical and medical terms. Some have multi touch technology to enhance the touch gestures with finger like the use of a mouse.
The important features of Tablets include
1. Media transfer – System that down loads audio/video files from computer.
2. Ink Art – Painting application 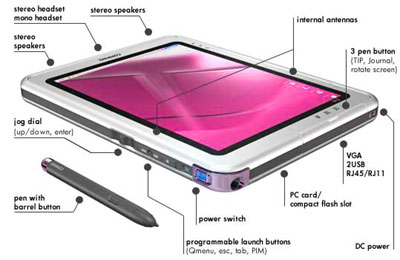 3.Snipping- Facility to allow the pen to select a part of the screen to annotate and send as email.
4.Ink desktop– Allowing to write directly on the desktop of Tablet.
5.Equation writer– Helps to convert the hand written equations to image to add in other documents.
6.Ink Flash card – Helps to write the flash card for displaying in slide show.
Graphics Tablet 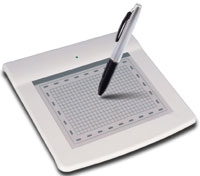 An input device that helps to add hand written drawings and letters into the PC. It is also known as Digitalizer or Graphics Pad. Just like drawing the image in a paper using a pencil, the image can be drawn on the tablet using the tablet Pen. 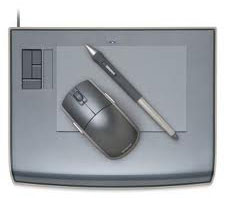 This is also helpful to add signatures in documents . The Graphics tablet has a square or rectangular flat screen on which drawings can be done using the pen like Stylus.

During drawing, the image appears on the screen of the computer.
Filed Under: Electronic Projects