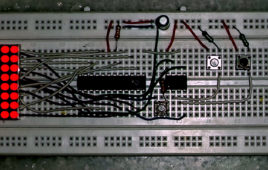 Tic-tac-toe is a classic game which requires no introduction. It is a pen and paper game played between 2 players (marked on paper as ‘X’ & ‘O’).The board setup consists of a 3×3 grid on which each player alternates between each moves. The player who succeeds in placing three respective marks in a horizontal, vertical, or diagonal row wins the game.This project is an attempt to recreate the classic game in a digital format. To spice things up a bit, instead of using the regular 2 player setup it uses an inbuilt AI mechanism to compete against the player. The project uses an 8×8 LED matrix to display the player’s move. The LED matrix is controlled by a display driver – MAX7219. The MAX7219 takes care of all the multiplexing, decoding and refresh circuitry via SPI interface connected to Attiny85. 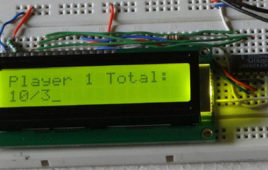 The project described here is a digital implementation of “book cricket game” which students normally use to play in their childhood time. The heart of the project is 8 bit MCU from AVR family called ATtiny85. ATtiny85 are small and cheap microcontrollers which are convenient for running simple programs with low footprint. The software used for programming the MCU is Ardunio which is a popular open source IDE. The overall design is kept to a least for simplicity and ease to use. The main components used in the circuitry are 16X2 LCD which is used to display the characters in 2 lines with maximum of 16 characters in one line, a serial in parallel out shift register HEF4094, ATtiny85, 2 push buttons and 7805 voltage regulator which regulates the voltage supply to maximum of 5 volts. Shift register HEF4094 is used because normally when LCD is used it requires 7 connections to the pins on the display. But if shift register is used the number of connections to the MCU can be reduced to only 3 wires.