Operating Systems have developed a lot in last 15 years. Starting from black and white phones to recent smart phones or mini computers, mobile OS has come far away. Especially for smart phones, Mobile OS has greatly evolved from Palm OS in 1996 to Windows pocket PC in 2000 then to Blackberry OS and Android. Android is a powerful Operating System supporting a large number of applications in Smart Phones. Android is a software bunch comprising not only operating system but also middleware and key applications. Android Inc was founded in Palo Alto of California, U.S. by Andy Rubin, Rich miner, Nick sears and Chris White in 2003. Later Android Inc. was acquired by Google in 2005.

After the invention of video games, ‘Short Message Service’ is by far the best thing that could have happened to the youth of the world. Short Message Service or lovingly shortened as SMS, has been one of the most significant means of exchanging information in the modern era of thumb twiddling youth. They are fast… 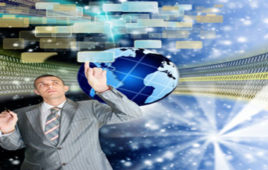 Primary requirements for any wireless mode of communication include high quality of service and data secrecy. Realizing that these two factors are to be fulfilled in the most optimized ways without the costs going too high, CDMA, a spread spectrum based technology came into existence. Initially restricted to the armed forces, this technology was commercially launched in 1995 by Qualcomm Telecommunications and now, as per Q4 of the year 2011, CDMA has over 8 billion voice and data customers in the 122 countries that it operates. CDMA is regarded as an improvement over GSM technology whose need can be easily understood by taking a simple example. Consider 5 couples that have their respective partners in different rooms. The partners are permitted to communicate only to each other and each is provided with a communication instrument for the purpose.

The presence of dangerous LPG leakage in the cars, service station or in the storage tank environment can be detected using the Ideal Gas Sensor. This LPG gas leakage detector unit can be easily integrated into a unit that can sound an alarm or give a visual suggestion of the LPG concentration. The sensor has… 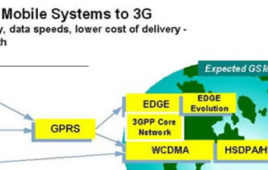 Second Generation (2G) technology was launched in the year 1991 in Finland. It is based on the technology known as global system for mobile communication or in short we can say GSM. This technology enabled various networks to provide services like text messages, picture messages and MMS. In this technology all text messages are digitally… 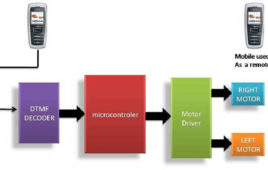 BLOCK DIAGRAM  PROJECT OVERVIEW In this project “Cell Phone Operated Land Rover“, the robot is controlled by a mobile phone that makes a call to the mobile phone attached to the robot. In the course of a call, if any button is pressed, a tone corresponding to the button pressed is heard at the… 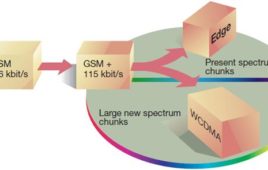 GSM technology was a voice-only service primarily with a few additional features like SMS and low-bit circuit switched data services. Circuit switched services had their disadvantages and hence General Packet Radio Service (GPRS) was introduced in 1999 which allowed data transmission and reception in packet transfer mode within a PLMN without a permanent dedicated route between mobile and the external network.However, it was capable of only 171.2 Kbps theoretically even when all time slots were allocated to data services. For multimedia services, a minimum throughput of at least 384 Kbps is required. As a result, Enhanced Data Rate for GSM Evolution (EDGE) was proposed to European Telecommunications Standards Institute in 1997. 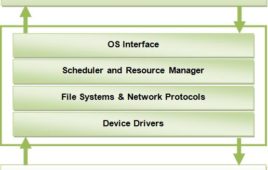 During the year 1950, the computer could carry out operation for only a single program at a time. The machine would be loaded with the program and the machine would be operated only after the program was completely loaded. Debugging of a program could be carried out using toggle switches and panel lights on the front panel.An Operating System is software made of data and programs that has a control to execute the application programs. It acts as an interface between hardware and applications. An Operating system serves as an interface between the programmer and computer hardware. Operating systems are present in the electronic devices such as video game console, web servers, supercomputers, cellular phones and many more. 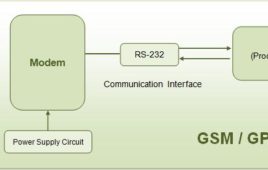 GSM/GPRS module is used to establish communication between a computer and a GSM-GPRS system. Global System for Mobile communication (GSM) is an architecture used for mobile communication in most of the countries. Global Packet Radio Service (GPRS) is an extension of GSM that enables higher data transmission rate. GSM/GPRS module consists of a GSM/GPRS modem assembled together with power supply circuit and communication interfaces (like RS-232, USB, etc) for computer.GSM/GPRS MODEM is a class of wireless MODEM devices which requires a SIM (Subscriber Identity Module) card just like mobile phones to activate communication with the network and an IMEI (International Mobile Equipment Identity) number for their identification.

This is an interesting application which controls the GSM modem using software designed and developed in C# on .Net framework. There is no need of microcontroller in between. The GSM modem is connected to the PC using a cross connection serial cable. This is a sort of mini simulator for mobile phones. Using this…