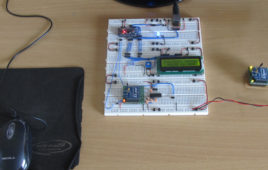 The applications of microcontroller are not limited to control simple electrical or electronic device but they are widely used in robotics and automotive industries nowadays. From simple rear view mirror control to complex engine control functions are done by the microcontroller. The microcontroller can even implement to automatically controlling the vehicle without a human driver inside it and such kinds of vehicles are called Unmanned Vehicles (UV). The UVs are commonly used research, military, rescue and agriculture fields. For any UVs the real time tracking of their path is necessary to ensure that they are moving through the proper way.This project demonstrates how it is possible to make a simplest path tracking device for a ground vehicle with the help of optical mouse. This project makes use of an optical mouse which works on PS2 protocol and is interfaced with an Arduino board to read the data from it. 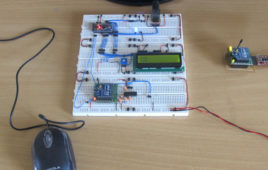 The PS2 mouse is an input device which can communicate with a host device using the PS2 protocol. It can be connected to a host device using the 6 pin mini DIN connector. The mouse will continuously give output which can be decoded to get the movement in the X-Y plane and also the status of the buttons on the mouse. The data read from the mouse can be decoded and processed to get the amount of change in position of the mouse with respect to the position at the previous read. This data is normally used in PCs to move a pointer in the screen. The PS2 protocol is a simple two wire synchronous protocol which makes it possible for the simple microcontroller board to interface the standard PS2 mouse or keyboard with it.This particular project demonstrates how to transmit the data read from a standard PS2 mouse from a microcontroller board to a distant PC. 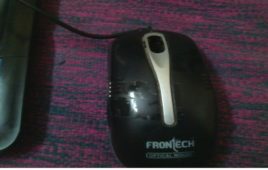 As we see the above procedure for developing as wired mouse for a purpose. The positive and the negative terminals are the output terminals. Then we see at the other end of the mouse orange and white are to be joined as we have no use of those, then we see to connect green and blue wire for negative and positive of the battery. Then here is the concept “when we apply the infrared radiation from the TV remote to the bottom of mouse (i.e. at bottom of the chip)  the output terminals go high about 1.5-2 volts for 1.5 seconds then clearly we find it as a trigger (oneshot)” then we can use this for the various purposes. For the counter, i.e. the remote IR LED is fixed in the axis of IC chip then o/p is connected in the place of the clock for serial reload counter. 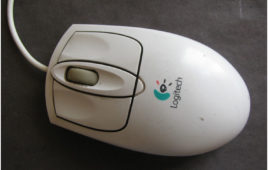 The first ever mouse was made by Douglas Engelbart of Stanford Research Center in 1963. It was one of the major inventions in computing world which supported keyboard to a large extent, making the experience of working on computer easier and faster. Since its invention different technologies have been developed to improve the efficiency of a mouse. A ball mouse is a type of electro mechanical device which uses a small ball as the key component to determine its movements and speed.The backside portion of the mouse shows the ball which is the heart of the ball mouse. When placed over a surface it rotates with the movement of the mouse. The ball mouse needs a flat surface with enough friction for smooth rotation of the ball and hence is generally accompanied with a mouse pad. 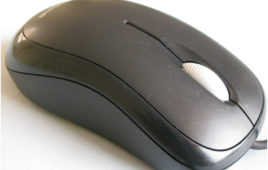 The replacement of conventional ball mouse by the technically superior optical mouse is not hidden to anybody. An optical mouse works by having a low resolution camera inside it which takes around 1500 to 6000 pictures per second of the surface beneath it, and by analyzing these images, it calculate the position, speed and movement of the mouse.When a mouse is connected with the computer, a red LED starts glowing. This light is focused on the surface beneath the mouse by a special type of lens (HDNS-2100). The reflected light falls back to the camera integrated in Optical Mouse Sensor.  The camera takes images of the surface with a frequency in the range of 1500 to 6000 images per second to calculate the position of mouse.