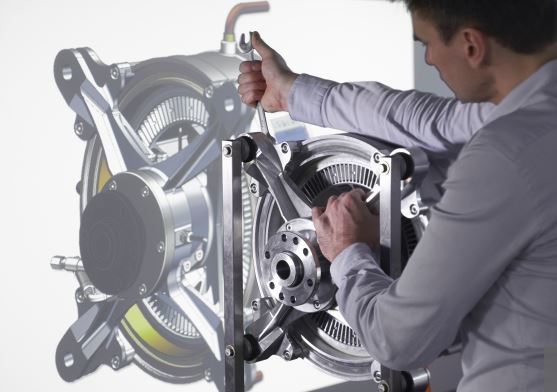 An electric aircraft called Extra 330LE aerobatic plane, took its first flight with Siemen’s SP260D motor during summers of 2016. The engine is an awesome one that delivers power worth 340hp at a weight of 50kg against the stereotypical Cessna 4-seater that is incapable of producing more than 200hp. The internal combustion engines that run very efficiently along a very narrow RPMs range, the electric motor is capable of performing extremely well at a range of speeds which allows the SP260D to push the propeller at 250RPMs generating a torque of 1000Nm without any gearbox. Siemens conducted the test on an aerobatic plane to showcase its ability to perform well on maximum acceleration conditions. The SP260D engine carries an efficiency of 95 percent with AC induction motor along a variable drive. It has been designed to be employed in a small size or large sized hybrid or electric airplanes.

The company has worked very hard on this project. Building a highly efficient engine with a five kW/kg power-to-weight ratio is a herculean task. The team started working on it with a few old motors testing all their parts one-by-one from every single aspect. Finally, they discovered that the aluminum sheet supporting and housing the bearing was actually very heavy. The designers reduced its weight by developing a sophisticated version of this endshield. The software displays the sheet in 1000 small parts and then controls the performance of each element under different force conditions. During this procedure the algorithm carries out millions of trials and error simulations spotting the elements that can either be reduced or omitted outrightly. The process mainly helped the engineers in redesigning the endshield turning the complete structure into a filigree framework with similar performance for less than half the weight. The team is currently working on a prototype that is formed from a different kind of carbon-fiber composite that will lead to reduction in weight by a factor of two.

Within the motor, the permanent magnets of rotor are arranged in form of a Halbach array that generates a very strong magnet field with very less material. The stator is formed from a cobalt-iron alloy that is very easy to magnetize. The winding of the motor is surrounded by a special kind of cooling liquid that is capable of transferring just the heat in place of electricity. The lead engineer of this team, Dr. Frank Anton, explains, “We use direct-cooled conductors and directly discharge the loss of copper to an electrically non-conductive cooling liquid which in this case can be, for example, silicone oil or Galden.”