Fig. 2: Block Diagram of TCP/IP based IoT Communication between Arduino and Thingspeak Server
Circuit Connections –
The IoT device that communicates with the ThingSpeak Cloud is built on Arduino UNO. The DHT-11 Sensor, IR sensor, Photodiodes, ESP8266 module and OLED module are interfaced with the Arduino board to make the IoT device.

The IoT device has the following circuit connections –
Arduino UNO – Arduino UNO is one of the most popular prototyping boards. It is an Atmega 328 based controller board which has 14 GPIO pins, 6 PWM pins, 6 Analog inputs and on board UART, SPI and TWI interfaces. The Atmega 328 is the sitting MCU on the Arduino board. The controller has the following pin configuration – 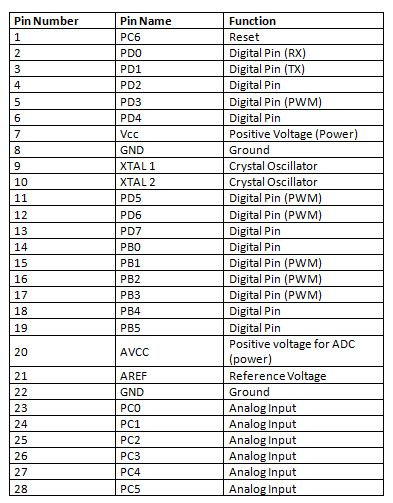 Fig. 3: Table listing pin configuration of Arduino Uno
There are two GPIO pins (external interrupt pins INT0 and INT1) of Arduino board used to interface photodiodes, TX and RX pins (pins 3 and 2 respectively)are used interface ESP module, SDA and SCL (pins 27 and 28 respectively) pins used to interface the OLED module.
OLED Module – The OLED module is used to display the temperature and humidity information as well as the count of the visitors (occupants) in the house.  The module communicates with the Arduino board using I2C protocol. This is a two wire protocol. The module has four pins – SDA, SCL, VCC and GND. The VCC and Ground are connected to 5V DC and common ground respectively. The 5V DC can be supplied through a battery via 7805 voltage regulator IC. The SDA and SCL pins of the OLED module are connected to the SDA and SCL pins ((pins 27 and 28 respectively) of the Arduino board. The OLED are made up of carbon based organic materials. So unlike LCD displays, they do not require backlight and filters. 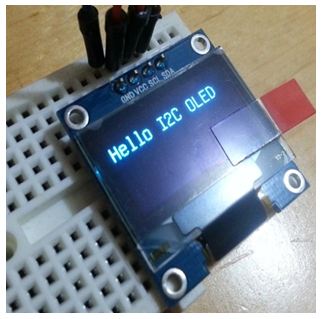 Fig. 4: Image showing initial messages flashed on OLED Display
ESP8266 Module – The ESP8266 Wi-Fi Module is a self contained SOC with integrated TCP/IP protocol stack that can access to a Wi-Fi network. The ESP8266 is capable of either hosting an application or off loading all Wi-Fi networking functions from another application processor. Each ESP8266 module comes pre-programmed with an AT command set firmware.  The module comes available in two models – ESP-01 and ESP-12. ESP-12 has 16 pins available for interfacing while ESP-01 has only 8 pins available for use. The ESP-12 has the following pin configuration – 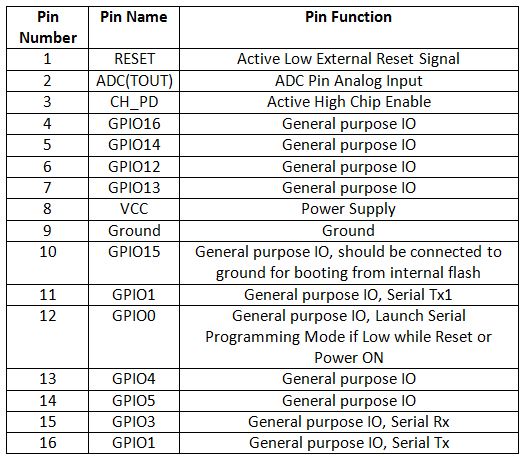 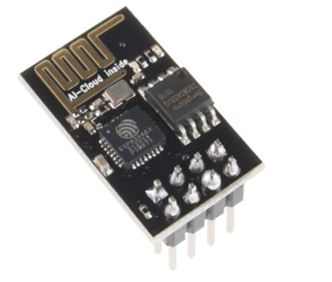 Fig. 7: Typical Image of ESP8266 ESP-01 Wi-Fi Modem
IR Sensors – An array of two IR LEDs is used in the circuit to detect entrance of any visitor. These IR LEDs are installed at the entrance of the house. An IR LED is a type of LED which emits light in the Infra-Red frequency range. The infra-red radiations are not visible to the human eye but can be seen by the lenses of a camera.  Operationally, IR LEDs are not much different from normal LEDs. They also need a 3V DC for biasing and consume 20 mA current. They also need to be connected with pull-up resistor in a circuit. In the array, IR LEDs are connected with 220 ohm pull-up resistors.
Photodiodes – The photodiodes are used as IR receivers in the circuit. A photodiode is a type of diode which gets forward biased when light is incident on it. It has a high resistance when no light is falling on it. When the intensity of light incident on it increases, it starts getting forward biased and current starts flowing through it. So, when light is incident on it, its resistance decreases and there is less voltage drop across it. When light is not incident on it, its resistance increases and there is higher voltage drop across it. The photodiode looks exactly like an LED and may have a dark blue or black film on the outer casing. The photodiodes are used in reverse bias configuration in the circuit. An array of two photodiodes installed in line with IR transmitters is used in the circuit. The photodiodes are interfaced at external interrupt pins INT0 and INT1 of the Arduino board. 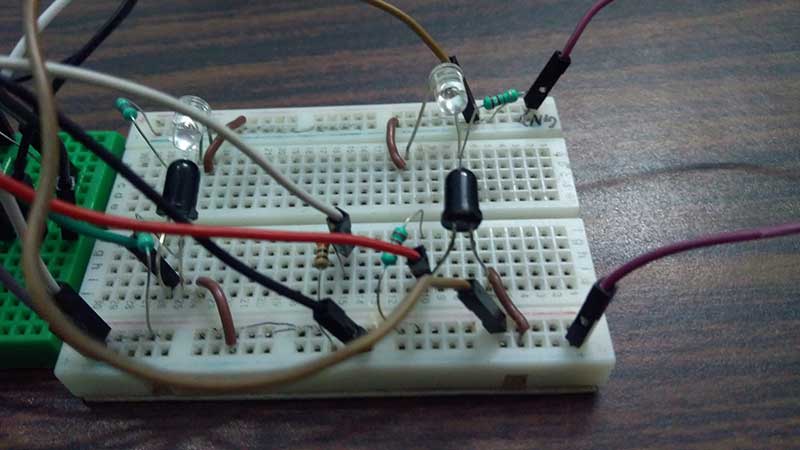 Fig. 8: Image of IR Transmitter and Photodiode Array used for counting visitors
DHT-11 Sensor – DHT-11 is a temperature and humidity sensor. The DHT11 sensor consists of two main components – one is Humidity sensing component and other is NTC temperature sensor (or Thermistor). The Thermistor is actually a variable resistor that changes its resistance with change in temperature. They both sense the temperature and humidity of area and give the output to the IC (which is placed on back side of sensor). The sensor has four pins – VCC, Ground, data Out and NC. The VCC and Ground pins are connected to the common VCC and Ground respectively. The Data Out pin of the sensor is connected to PD7 pin of the Arduino board via 10K pull-up resistor. 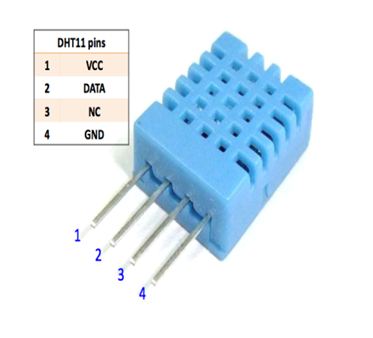 Fig. 9: Pin Diagram of DHT-11 Temperature and Humidity Sensor
ThingSpeak Server – The ThingSpeak server is used to visualize the data received from the IoT device. The data is displayed in the form of graphs on the platform. The ThingSpeak generates the read and write API key. The Write API key is used to write the data to the channel and read API channel is used to allow other people to view private channel feeds and charts. The data can also be saved on the platform for future reference.
In order to configure the ThingSpeak platform to access the data on it, first an account must be created on the platform. Then a channel must be created for the data on that account. It can be done by navigating to channel window and creating a new channel. The required information must be filled in the given form at the website so that the needed fields are created. For this project, there must be created three fields – Total Persons, Temperature and Humidity. These fields can then be checked live on the server.  After saving the channel settings, a Write API key is generated which must be noted down. This Write API key is used in the firmware code of the Arduino to access the private channel created on the ThingSpeak account. 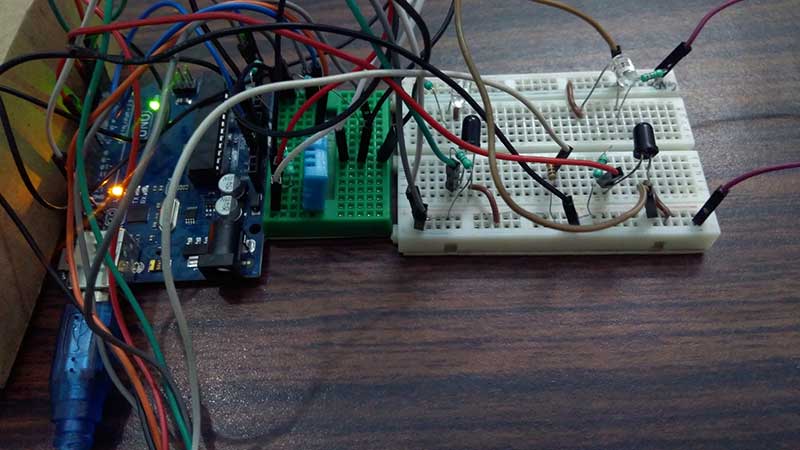 Fig. 10: Prototype of ESP8266 based TCP-IP Connected Thingspeak Arduino Visitor Counter
How the circuit works –
As the circuit is powered on the Arduino board starts reading data from the IR receivers and the DHT-11 sensor. The IR receivers are connected in series with variable resistors between VCC and ground in reverse bias configuration forming a voltage divider circuit. The output from the IR receivers (photodiodes) are drawn from the junction of cathode terminals of the IR receiver. Under normal conditions, the light emitted by the IR transmitters is continuously received by the photodiodes. This keeps the digital logic output of the photodiodes to HIGH. When a person enters the house, the light from the IR transmitters is blocked and the logical output from the photodiodes is switched to LOW. The IR receivers are connected at the external interrupt pins of the Arduino, so an interrupt is generated at the INT0 and INT1 pin of the Arduino when a person enters or exits the house. There are two pairs or IR transmitter and receiver used. The sequence in which the interrupts are generated at the INT0 and INT1 pins indicate whether a person has entered or exit from the house. Accordingly, the count of the current occupants of the house is increased or decreased.
The DHT11 Temperature and Humidity Sensor is a digital sensor with inbuilt capacitive humidity sensor and Thermistor. It relays a real-time temperature and humidity reading every 2 seconds. The sensor operates on 3.5 to 5.5 V supply and can read temperature between 0° C and 50° C and relative humidity between 20% and 95%. The DHT11 detects water vapors by measuring the electrical resistance between the two electrodes. The humidity sensing component is a moisture holding substrate with electrodes applied to the surface. When water vapors are absorbed by the substrate, ions are released by the substrate which increases the conductivity between the electrodes. The change in resistance between the two electrodes is proportional to the relative humidity. Higher relative humidity decreases the resistance between the electrodes, while lower relative humidity increases the resistance between the electrodes.
The DHT11 measures temperature with a surface mounted NTC temperature sensor (Thermistor) built into the unit. The DHT 11 Sensor sends data in the digital form to the Arduino board on one-wire protocol which must be implemented on firmware side. First the data pin is configured to input and a start signal is sent to it. The start signal comprises of a LOW for 18 milliseconds followed by a HIGH for 20 to 40 microseconds followed by a LOW again for 80 microseconds and a HIGH for 80 microseconds. After sending the start signal, the pin is configured to digital output and 40-bit data comprising of the temperature and humidity reading is latched out. Of the 5-byte data, the first two bytes are integer and decimal part of reading for relative humidity respectively, third and fourth bytes are integer and decimal part of reading for temperature and last one is checksum byte. The one-wire protocol is implemented on the firmware using an open-source library available for Arduino. The Arduino also connects with the Ethernet using an open-source library. The read temperature and humidity values along with the occupants number is displayed on the OLED module. 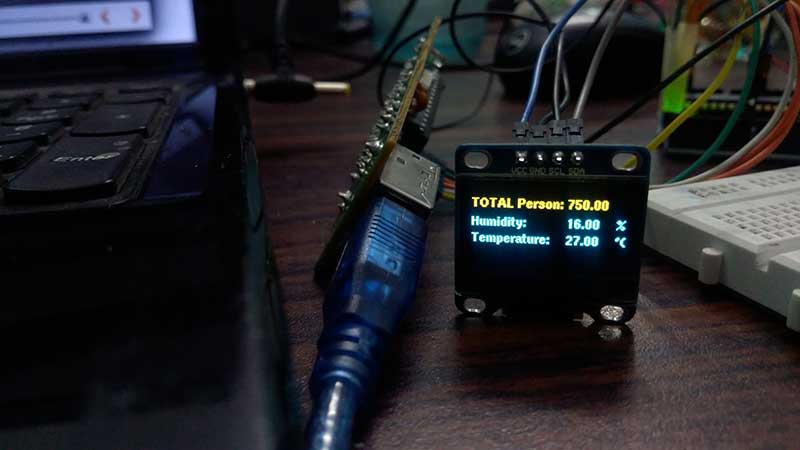 Fig. 11: Screenshot of Graph showing number of visitors on Thingspeak Server
The same data is passed to the ThingSpeak server every three seconds by accessing the server through Write API key. The data is passed over TCP/IP protocol by sending AT commands to the ESP module through serial communication. The data passed for all the three fields is updated every three seconds and is displayed in the form of graphs on the server. The visitor count is displayed as follow – 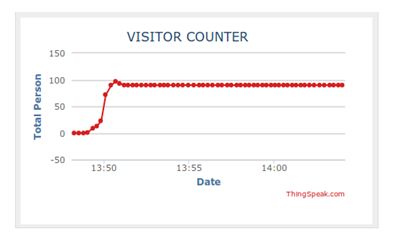 Fig. 11: Screenshot of Graph showing number of visitors on Thingspeak Server
Similarly, the temperature is displayed on server as follow – 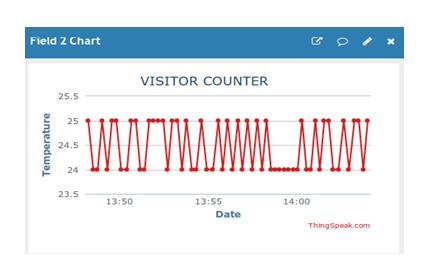 Fig. 12: Screenshot of Graph showing temperature on Thingspeak Server
The humidity is also displayed graphically on the server as follow – 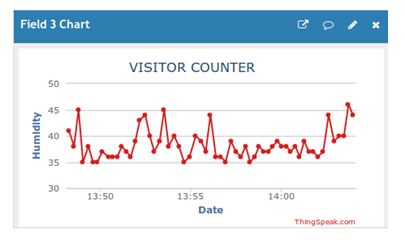