Ever wondered how your Air Conditioner or Heater or Refrigerator adjusts its temperature automatically? The answer is a Temperature Control System. This article will show you how to build a model of such temperature control system using minimum components and without any complex circuit.

Control System is a combination of various physical elements connected in such a manner so as to regulate/direct/command itself or some other device/system.

Feedback is a fractional part of the past/present output which is fed back to the input. In case of positive feedback, it is added to the input and if it is negative feedback then it is subtracted from the input.

Depending on feedback it is divided into two types:-

9. Multi-meter (Digital one is Preferred)

Basically the circuit switches ON a toy motor fan connected to the motor driver whenever heat is applied to the temperature sensor unit using say a burning matchstick. The wind from the motor fan would blow off the matchstick and switches OFF itself automatically.

Here the Temperature is the output to be controlled. A feedback is generated using the sensor which is fed into comparator which acts as a controller here. And the power is the input.

The Temperature sensor LM35 is very accurate whose output is directly proportional to its surrounding temperature. For every 1°C of rise/fall in temperature, the output voltage of the sensor varies by 10mV.

—-> At room temperature, the output of the sensor would be a stable value. Connect the sensor to the +5V and GND and then measure the voltage at the output pin using a multi-meter. Note down the value as V1 for further use. In my case I got 0.28 Volts. It is not necessary that you get the same readings since the value depends on Temperature of your room, Quality of the sensor, multi-meter, etc.

—> Now apply power to the potentiometer and take readings from the output of it. Adjust the potentiometer using a screw-driver in such a way that it’s output voltage is slightly higher than that of the voltage readings obtained from the temperature sensor output pin. This is your reference voltage V2.

(Note: The higher you set the pot voltage, the lesser sensitive you system would be. I set it to 0.35 Volts so that I get a quite sensitive system i.e. a system with quicker response to the temperature variation. If you set it with lesser variation from V1 voltage then the system would respond even for small temperature changes also and would switch ON or OFF the fan faster.)

—> Now assemble the other components as per the given circuit. Connect the propeller to the motor axle to make the fan.

—> Mount the fan firmly on a small plastic or carton box to so that it can rotate freely.

I used electrical tape to attach it to the box since it was a cardboard box. 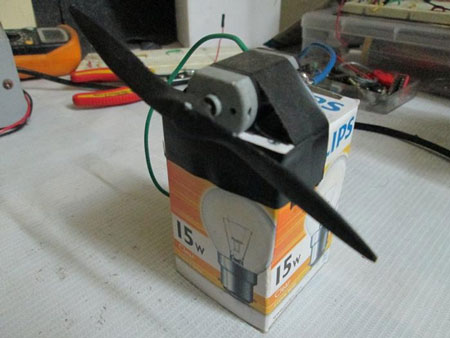 Position the fan in such a way that when turned ON, it directly blows wind onto the LM35 IC.

Set up and Working

This is how my setup looks 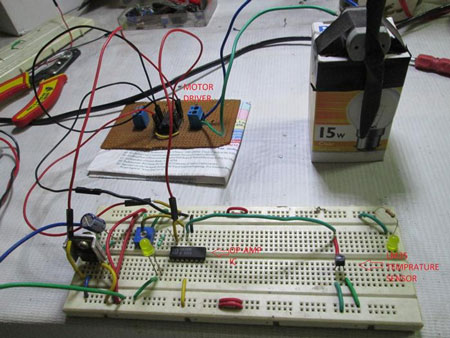 If everything is done right then the motor would start spinning within few seconds and would blow heavy air on matchstick, extinguishing the fire. After a few second the motor will automatically stop spinning.

1. Make sure you keep away from the propeller blades while the fan is in ON state. It may be weak normally but while revolving at high speed, the propeller can hurt you easily.

2. Since we’ll be using a burning matchstick to apply heat to the sensor so care should be taken. Isolate the temperature sensor away from any wires or any other components and take some precautionary measures.

Do it in a well-ventilated room.

Initially, at room temperature, V1 < V2 and hence the output of the comparator is low so the motor is in OFF state.

When the motor turns ON, It produces high velocity wind and blows off the matchstick. Now since the heat source is turned OFF, the temperature sensor starts cooling and there by its output voltage V1 reduces gradually. When V1 falls below the reference voltage V2, the comparator’s output again goes low and hence turns off the motor. No matter how many times you try, the fire on matchstick put near the sensor will be blown off.

Advantages of this circuit:

3. No need of any advanced programming or Microcontrollers.

Air conditioner, Heater, Refrigerator works on the same principle but the difference is that it uses more advance equipments to do the job more precisely. Take the AC for example. You set it to a particular temperature say 17°C and so the AC works only till it cools down the room temperature until it reaches the pre-set temperature and then switches off. After a while the temperature would rise above 17°C and then the AC would again start working only until it brings the temperature to the pre-set value again.

More Images of the Circuit 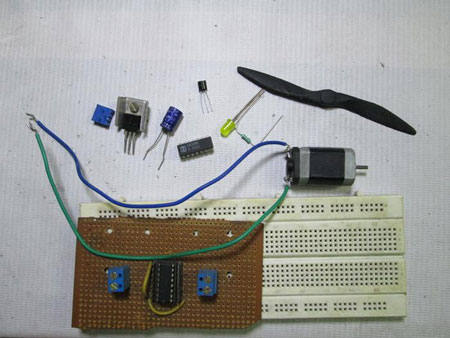 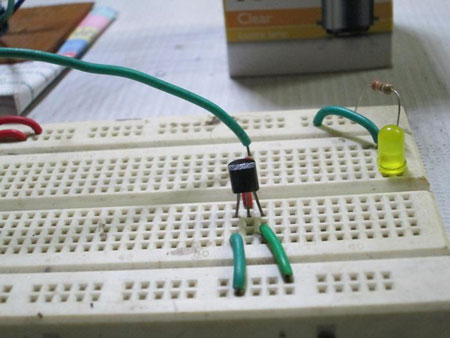