As a result, the massive waste of fish has been utilized to fabricate flexible nanogenerator that can provide energy to more than 50 LEDs. It is possible with the collagen fibrils present in the fishes that offer the possibility of preparing a crystal-clear and round fish scale. 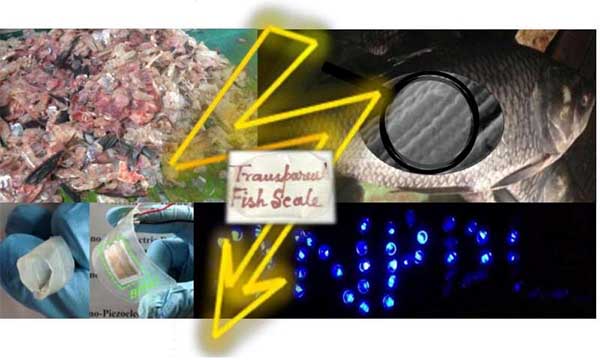 The primary premise behind the scientist’s work is simple. The Fish scales comprise collagen fibres that contain a piezoelectric property that implies that an electrical current is created in response to placing a mechanical stress. According to the team, they were able to connectthis feature to construct a bio – piezoelectric nanogenerator.

“For this, the scientists first gathered biowaste in the sort of hard, raw scales of fish processing market and then utilized a demineralization procedure to make them flexible and transparent,” explains DipankarMandal, an assistant lecturer, Organic Nano-Piezoelectric Device Laboratory, Department of Physics at the Jadavpur University.

The collagens present in the processed fish scales offer as an active piezoelectric element. “We were able to prepare a bio-piezoelectric nanogeneratorthat is energy harvester with electrodes on both the sides and then covered it,” says Mandal.

While it is well-known that a singular collagen nanofibreshowcases piezoelectric, till now no one has attempted to emphasis on structurally organizing the collagen nanofibrils within the basic fish scales.

“We wanted to enhance what occurs to the piezoelectric yield when a group of collagen nanofibrils are hierarchically well shifted and self-organized in the fish scales,” he stated. “And we identified that the piezoelectricity present in the collagen of fish is quite big, which we were able to guarantee through direct measurement.”

The work of this team is the first proven demonstration of the direct piezoelectric effect of fish scales from electricity produced by a bio-piezoelectric nanogenerator under the mechanical boost without the requirement for any post-electronic polling behaviour.

“We very well know the shortcomings of the post-processing treatments of piezoelectric substances,” said Mandal. For exploring the fish-scale self-alignment collagen phenomena, the scientists utilized near-edge X-ray absorption of fine-structure spectroscopy, estimated at the Raja Ramanna Centre for Advanced Technology in Indore, India.

Theoretical and experimental experiments supported them to clarify the energy scavenging functionality of the bio-piezoelectric nanogenerator. It is efficient of scavenging numerous sorts of ambient mechanical energies comprising machine, body movements, wind flow and sound vibrations. Even regularly touching the bio-piezoelectric nanogenerator with a finger can switch on approximately more than 50 LEDs.