Graphene is an excellent substance. It is conductive, slim, flexible and transparent. However, it does not act as a semiconductor so its usage in the electronics industry is restricted. Hence, in order to enhance the usability of graphene, the IBS researchers sandwiched a layer of the 2D semiconductor MoS2 between the two graphene sheets and place it over a silicone base. Initially, they considered resulting dives was too slim to produce an electric current, but, surprisingly, it did.

“An equipment with single layer of MoS2 is too sleek to produce a conventional p-n junction, where n is for negative and p is for positive are separated and can prepare an internal electronic field. But, when we illuminate light on it, we identified high photocurrent. It was surprising! Since it cannot be a conventional p-n junction, we thought to research it further,” explains YU Woo Jong, the head author of the research.

To comprehend what they have identified, the scientists compared devices with single and seven layers of MoS2 and experimented how well they act as a photodetectorthat is how effectively they can transform light into an electric current. They identified that the device with single layer of the substance absorbs less light than the device with multiple layers, but is comprises higher photoresponsitivity.

“Typically, the photocurrent is proportional to the photoabsorbance that is if the device absorbs more light than the device with multiple layersthen it should produce more electricity, but in this stance, even if the single layer device has smaller absorbance than the multiple-layer substance, it releases seven times more photocurrent,” states Yu.

The single layer is sleeker and hence more sensitive to the surrounding environment. The botton SiO2 layer enhances the energy barrier, while the air above it reduced it hence electrons in the monolayer device have a higher probability to move within the layer of MoS2. The energy constraint at this junction is lesser than the one at the other consequents, and generates an electric current. Alternately, the energy barriers between these two elements are symmetric. Hence, the electrons must have the same potential to go either side and hence diminish the released current.

When light is absorbed by the device and MoS2 electrons shift into an excite state, then the leave the so – known holed behind. Holes function like positive mobile charges and necessary positions left empty by the electrons that absorbed ample energy to shift to a higher energy position. Another trouble of the thicker device is that electrons and holes shift too slowly through the junctions between MoS2 and graphene, resulting to their undesired recombination within the MoS2 layers. 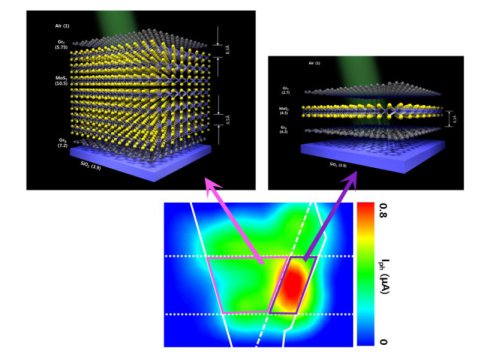