Continue to Site
The wearable technology has been in trend for quite some time, after the solar charged fiber and data registering thread, a social interaction dress has hopped onto the center stage. Though a comparatively smaller hack, this is a commendable development based on Raspberry Pi systems. And the best part, this one can be built by  little efforts from your end. The project was pursued by a Raspberry Pi employee, Clodagh O’Mahony. 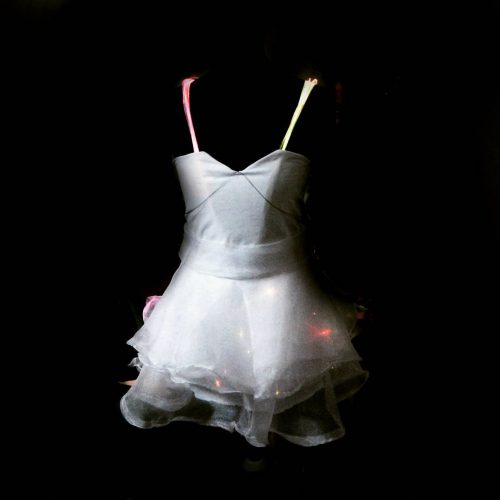 The girl worked diligently over the project starting right from the pre-thesis to other stages. She completed the final designing of the dress this month. In her thesis, Clodagh focused her efforts on two prime components – the dress as well as its accompanying site. The dress has one Raspberry Pi, some fibre optics, a Pimironi Blinkt and an Adafruit 12-key Capacitive Touch Sensor Breakout. All these are encased in a pretty 3-D printed case.
On the inner end, the dress splits into a number of sectors while the lights glow as any specific body part gets in tactile contact with the dress. This miracle happens with the help of conductive thread. So as soon as you place your hand over the waist for dancing the dress would start glowing purple while the hip part would go green, and so on. Since the light come to life only with touch, the dress records the interaction through a point system and relay the information back to the website.
If you study the site you will see how well the website and dress coordinate with each other. It throws light on an important aspect as to how celebrities open up their personal life with the prospect of “selling themselves online”. Their life is open for viewers for close scrutiny and let people know how their career moves ahead. Apart from touch, the dress also gives points to the voice of the person wearer has interacted with. Positive words bring out positive coloring while negative words show a reverse effect. Though the words are not registered as it is, the acknowledgement takes place through catalogue and points awarded to them in a pre-defined manner.
The dress is really wonderful and an exquisite example of fashion based new technologies.
Filed Under: Reviews