Continue to Site
Jaime Ruiz-Avila happens to be a physicist who specializes in stochastic resonance and laser science. The man is presently running a highly successful crowdfunding campaign for his latest project called Holovect Mk II. This one has been billed as one of the first commercially available laser based desktop ‘holographic’ display screen that can draw 3D objects in surrounding air through light. You can find details of complete project in the campaign and helps you understand how these images aren’t holograms but volumetric vector images. 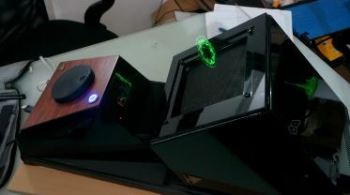 All the images that are projected over a 12 x 12 x 12 inch cube known as ‘drawbox’, the fans present rectify the air’s albedo inside the box to display the light. The main iam of this laser is to control the position of an air column that can place a light pixel anywhere in the given 3D space. The movement of laser in different directions leads to formation of vectors, when these vectors are joined from different directions that form the vector object. The Mk II is capable of forming 50 images per second forming an illusion of vector object rotating in space.
Ruiz-Avila likes to call these objects that have been created as Holovects ‘vects’. These vects come from a long list of 3D coordinates while the 3D shapes are formed in a consistent loop. If you watch the example the starship that has been explained here looks more like a coordinate work that has been done using plotly. Every single model shown in the campaign displays green light only, however, the RGB options says that each single vector can be printed in the 24 color bit.
Vects can be uploaded via USB while the page mentions that scan data or STL files can also be visualized over the machine. Nevertheless, most of the examples used in this campaign are derived from science fiction stories that are very simple as compared to CAD designs that are part of several manufacturing processes. The maker is also providing a software development kit that will be given to the users prior release of machines.
Filed Under: News