When solar cells absorb light to create electricity, electrons and ‘missing electrons’ are created that travel through the coatings of materials in typical solar cells. Such novel material conducts the missing electrons, while remaining stable and transparent. In the greatly magnification colorized image of the atomic structure in a myriad of layers ideal for a solar cell, the intersection of a layer of the transparent hole-conducting material, basically yellow, with an electron conducting-layer, basically green is revealed.

The novel material can result in more effective solar cells, light detectors, light-emitting diodes and other transparent electronics. Multiple applications ranging from flat panel displays to solar cells need high-performance transparent conducting oxides. It is also useful for commercial applications that need transparent oxides for conducting electrons. Their counterparts, which are transparent oxides that perform ‘missing electrons’ known as holes, have not yet commercialized because of low conductivity. Transparency and conductivity were considered to be normally mutually exclusive properties.

Now the scientists at the Pacific Northwest National Laboratory, Washington State along with collaborators at Binghamton University, New York, and the Berlin’s Paul Drude Institute have introduced a novel material that performs holes, without disturbing much of its transparency. 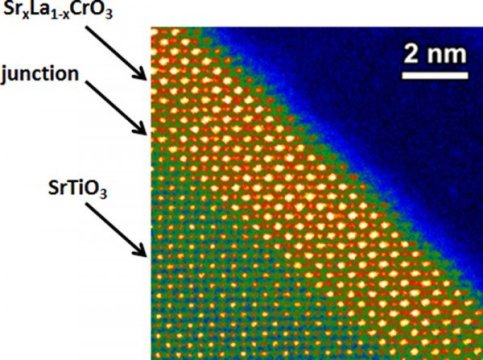 The novel material with an exceptional perovskite structure effectively conducts holes and maintains a maximum of its transparency. The material is manufactured with the chemical substitution of strontium for up to 25 percent of the lanthanum in chromium oxide. For demonstrating the potential of this novel material, crystalline layers were introduced on strontium titanate through a process known as molecular beam epitaxy. When the light gets absorbed in the double layer film, holes and electrons were generated. The electrons shifted into the strontium titanate layer, while there was a movement of the holes into the novel material.

The novel transparent film possesses ‘hole-conductivity’, which is competitive with the finest hole-conducting oxides of transparent nature. Based on its chemical and structural compatibility, this novel material delivers excellent promise for integration into and improved performance of electronics grounded only on perovskite oxides. Such oxide electronics need negatively charged and positively charged materials to be placed in contact with each other. With such novel material, both the layers can avail compatible structures known as perovskites. Some of such examples are high power sensors and devices.