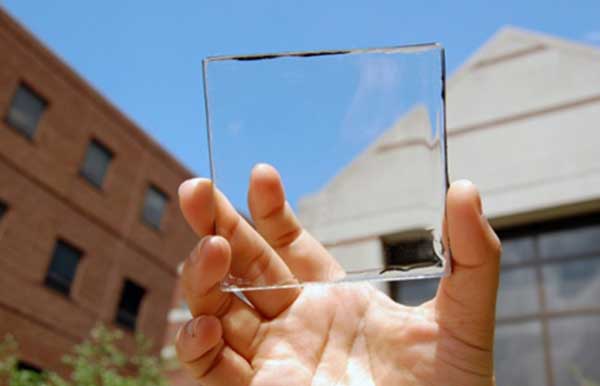 1 INTRODUCTION
The non-renewable energy sector in today’s economy depends heavily on Solar Energy which converts energy from the sun into electricity. The main point about solar energy is that, the energy is absorbed from the rays of sunlight and therefore making it necessary for a solar cell to be opaque so that it absorbs the energy from the light and for this reason it cannot be transparent and let the sunlight just pass through it. So a solar panel, apart from being a solar panel, cannot multitask as anything else. It just adds an extra layer on a base layer. Coming to making the solar panel transparent, it is scientifically quite impossible, but can be bypassed by manipulating the absorption of a particular segment of the electromagnetic spectrum.
A team of researchers from Michigan State University have created a fully transparent solar cell in August of 2014. Unlike the traditional solar cell, it allows photons to pass through it completely thereby allowing people to see through them. It uses an ingenious manipulation of material properties by the use of material science and chemistry. The team is headed by Richard Lunt who is an assistant professor at Michigan State and founded the company Ubiquitous Energy to commercialize this technology. Lunt is confident that this product will be useful for implementing in big buildings with lots of windows or the displays of mobile devices to reduce the load on the primary power source. In this article, we will discuss how they manage to bypass a huge limitation of the conventional solar cell. First we will understand the concept of a Luminescent Solar Concentrator (LSC) and then apply that logic to understand how it can be made transparent.
2 LUMINESCENT SOLAR CONCENTRATORS
The conventional photovoltaic solar panels at this time are quite costly to install at homes where people are looking to have a clean environment. The high costs are attributed to firstly, the use of expensive photovoltaic semi-conductors to generate electricity in response to receiving sunlight and secondly that they are currently not very efficient. The trivial solution would be to work in increasing the efficiency of the photovoltaics itself but it is more economic to make tweaks to the solar panels so that they are exposed more sunlight during uptime. Achieving this is the objective of two main projects namely, solar trackers and luminescent concentrators. Solar trackers are mirrored assemblies with mechanisms built to follow the sun in the sky to adjust the solar panels to an optimum angle to receive maximum sunlight. But, solar trackers are expensive since they need to move. They also cause the photovoltaics to heat up excessively and therefore require the need for an additional cooling system. Luminescent solar concentrators work by taking the radiation energy from a large area and concentrate it on a smaller area by absorbing and emitting directional luminescence
2.1 PRINCIPLE
Luminescent solar concentrators work by concentrating the radiation from a large surface to a smaller area to improve the effectiveness of solar cells produce electricity. In principle, it works by converting the radiation from a large area into a glowing luminescence and is directed towards a smaller area, basically just squeezing the light and therefore increasing the power density.
2.2 DESIGN AND CONSTRUCTION
LSCs contain parallel sheets of normal plastic and dye coated plastic. When the sunlight passes through the plastic, it is absorbed by the plastic. The electrons of the dye are then excited by the addition of energy from the radiation and jump to a higher level. When they fall back to their ground state, energy is released in the form of radiation. This radiation is reflected through the plastic sheet through the principle of total internal reflection i.e. when the light is more than a certain critical angle, it is reflected from a transparent surface. The light is guided by the total internal reflection waveguides to the smaller surfaces of the concentrator where it is absorbed by the conventional photovoltaic semiconductor strip. These solar concentrators are cheaper than solar trackers mostly since they are stationary and do not require additional cooling system. Also, the yield per unit cost would be higher when used in conjunction with these luminescent concentrators by increasing efficiency by about 50%. The only problem that needs to be tackled would be that the reabsorption of radiation into the dye when it is bouncing around inside leading to a loss in energy. Transparent luminescent solar concentrators are a special type of LSC which replace the translucent dyes by organic salts which do not absorb the visible spectrum of sunlight and therefore allowing photons to pass through.

Figure 2close up of a functional TLSC

The basic concept of the transparent solar cell is that the transparent glass isn’t actually the solar cell. The glass is actually a transparent luminescent solar concentrator. It consists of organic salts which are complex cyanine derivatives fused with the glass. Cyanine is a synthetic dye which are used as fluorescent dyes in the biomedical imaging field, which are a shade of cyan as the name suggests and depending on the structure covers the IR to UV spectrum. Particular salt derivatives of the cyanine dye which are precipitated by its reaction with a base, are used to absorb the near infrared and ultra violet spectrum while allowing the visible light to pass through.This allows the glass to allow the visible part of the electromagnetic spectrum to pass through but absorbs the ultraviolet and near infrared region which are invisible to the human eye. The cyanine derivative luminesce (emit) the absorbed energy in a different infrared frequencywhich is channeled to the edges of the glass by total internal reflection to the edges with the smaller surfaces which are lined with small scale conventionalphoto voltaic solar cells which is then converted to electricity.

The current TLSC has an efficiency of 1% and therefore has a long way to go become a useful addition. Lunt believes that it needs to be brought to a value of 10% before being effectively utilized to power buildings where they replace the glass windows. They believe they can currently bring it up to 5% and working to higher the efficiency by adding more effective layers which hamper the absorption and reduce energy leakage. At an efficiency of 5% the windows can be used to power LED lights that are present in that floor. At higher efficiencies they can add an effective contribution to reducing the fossil fuel dependency. As an added advantage it can also protect the interior from harmful UV rays which can cause skin problems. Researchers also believe that they can be used to replace the display screens of smartphones to power onboard electronics in combination with the Li-ion batteries to greatly increase the battery life of the heavy powered smartphones of this generation

4  CONCLUSION
This is also not the first time that scholars have tried to produce transparent solar panels. Researchers have also used micro scale solar cell arrays as sheets placed in between glass sheets so that they allow a nominal amount of light to pass through. But, these panels are noticeable in the opacity by casting a colorful shadow which may not be pleasant to the people inside. It is in this aspect where the TLSCs have an upper hand to progress further as they display almost 90% transmittance of visible light. Keeping in mind that this is currently an innovation, it is quite an inspiring concept which smartly bypasses an obstacle of classical physics. Sure there are pros and cons to this invention but it would be exciting to watch how this product can alter the way we utilize the raw source of solar energy into an era of self-sustenance.
Filed Under: Articles