About Bicolour LED
Bicolour LED’s have a pair of terminals, like an ordinary led. However, they contain a pair of LEDs, arranged in parallel, connected opposite ways round. Bicolour LEDs come in red/green, red/yellow and green/yellow. If a voltage is applied one way round one of the LEDs comes on. If the voltage is reversed, the current flows though the other LED. So, depending on the way the voltage is connected, the bi-colour LED gives different colours. 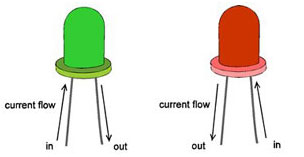 The circuit uses an Operational Amplifier CA3140 as a voltage comparator. CA3140 has sensitive inputs and readily detects very low current. Its Inverting inputis connected to a preset VR1 for setting the reference voltage. VR2 act as thefeedback resistor. When the voltage level in the battery drops to 10 volts (as set by VR1), output of IC1 goes high and the Green half of the bicolor LED lights. When the battery voltage rises above 13.8 volts, output of IC1 turns low and the Red half of LED lights. If the battery voltage is sufficient LED remains off.
Bicolour LED has only two leads( Tricolor LED has 3 leads) so that it can be connected either way round. Before connecting the leads, identify the terminals for Red or Green half. Connect the circuit in a variable power supply and give 10 volts. Slowly adjust VR1 till Green LED lights brilliantly. If not adjust VR2 also. If the voltage increases above 11 volts, Green LED turns off and if the voltage increases further to13.8 volts, Red LED turns on.