In the previous three tutorials of this series, we saw how to vary the intensity (brightness) of LED and DC motor speed using the PWM output of ATtiny85.

If you are not following this tutorial series from the beginning, then you should go through the following two tutorials that explain and demonstrate how to work with ATtiny85 and a step-by-step guide to build a hello world (LED blinking) application.

How to work with ATtiny85
LED blinking using ATtiny85 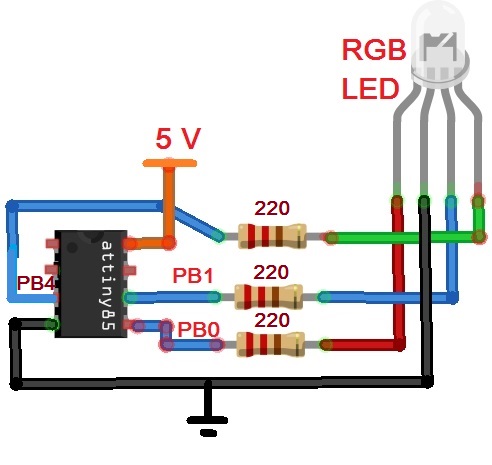 Program
The program is written in Arduino IDE software using the C programming language. It is compiled, and a HEX file is created that is downloaded into the internal FLASH of ATtiny85.

Firstly, it will turn OFF the green LED by making its intensity 0 and make the red LED fully bright. Then it varies the brightness of the blue LED from minimum to maximum. This will generate different shades and colors of pink and magenta and then change the brightness of red LED from minimum to maximum. Again this will yield different colors and shades of light blue and dark blue colors.

Thus the program will turn ON one LED fully, turn OFF the other LED, and vary the intensity of the third LED. This will generate very nice and eye-catching colors and shades.

The program will start varying the intensity of two colors together like red+green, green+blue, and red+blue. So this will also create so many different colors and shades.

In the next tutorial, we shall learn to interface Bluetooth module HC05 with ATtiny85.