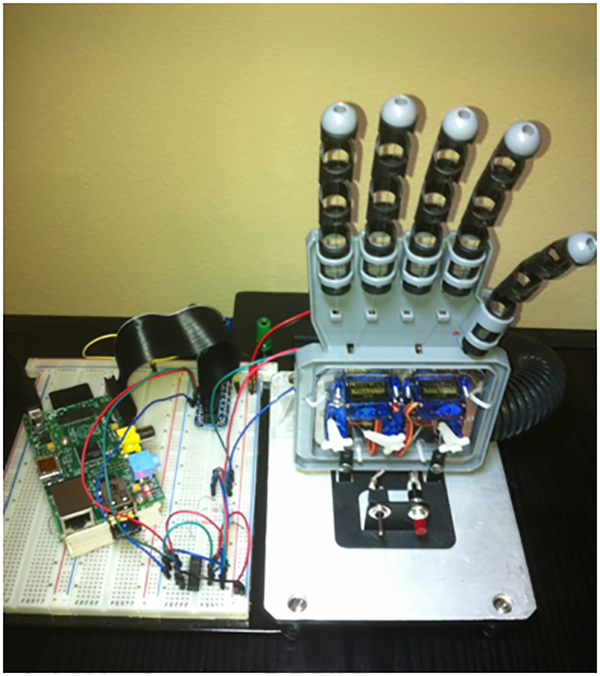 It was bound to happen. Sooner or later someone was bound to create a robot hand that gives you the finger on command. Here’s one such robotic hand, beautiful constructed,  which is (or was) controlled by Twitter. Named “The Hand of PI” by its creator, it gets activated upon sending a tweet to @OurCatDoor handle. Depending on the text of the tweet, the “The Hand of PI” will do what you command. The recognizable copmmands are (text in lowercase):

4) hookem: the maker is a Texas Longhorn fan and this gesture makes sense to the fans

5) fist: the Hand of PI gets ready to fight

6) open: palm open and welcome for a high five

7) finger: this command will make the hand give, well, The Finger

While the twitter handle is still active, I doubt if the robotic hand is still functional and still operating with that handle. You can tweet to the owner to confirm or maybe directly send one of the commands to @OurCatDoor to see how the owner responds.

The hand is based on Raspberry PI which runs a Python script searching any tweet sent to @OurCatDoor. In the video below, you can watch an iPad tweeting to @OurCatDoor that has the command “finger” in it.  It takes a few seconds to process, but eventually the Raspberry PI finds the tweet, parses it, and recognizes the text “finger” as a valid command. The Python script sets the PI’s GPIO ports High/Low.  The PI GPIO is connected to a PICAXE 18M2 via a HC7404 buffer. The PICAXE 18M2 reads the PI’s GPIO to control five servo motors.  “The Hand of PI” then does what it is supposed to 😉