The doorbells produce a ringing alert sound so that the resident comes to know that there is somebody at the door. Many homes have two doors for entering. So, sometime it become confusing for the resident to find out on which door visitor is  present. This project on doorbell circuit produces two different sounds and can be used simultaneously on both the doors. This circuit also gives a visual indicator so that deaf person can also know. For this we use different color LED for different door so that it becomes easy to know whether the visitor is present on front door or rear door. 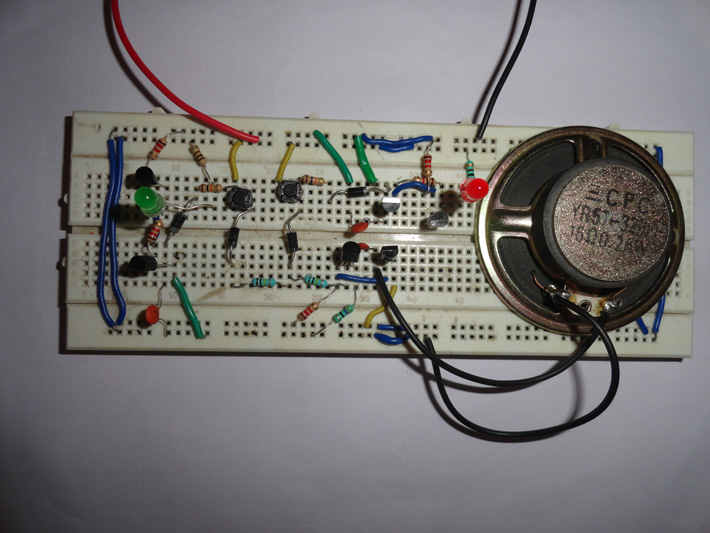 This simple circuit is based on transistor, diode, resistor and switches with few more components.

1. Resistor– Resistor is a two terminal passive component used to control the flow of current into the circuit. A current through resistor is directly proportional to the voltage applied across resistor terminal.

We can calculate the value of resistor with the help of multi-meter or we can do it with help of color code available on resistor.

2. Diodes– Diode is a two terminal device with a asymmetric characteristic means it allows low resistance to current flow in one direction and high resistance in another direction. Therefore it allows current to flow in one direction and blocks the current that flows in opposite direction. The two terminal of the diode is referred to as anode and cathode. Because of its unidirectional behavior they are used to convert alternating current to direct current.

3. Transistor– Transistor is a three terminal electronic device used to amplify weak input signals. A transistor consists of two PN junction diode connected back to back. Transistors are of different types such as bipolar junction transistor, Field effect transistor and photo transistor. They are mostly used in electrical appliances due their smaller size and light weight. In addition they posses less power hence have greater efficiency.

4. Speaker- Speaker is a transducer which produces sound in response to electrical audio signal applied at input.

1. Polarized capacitor- They have polarity means + and – sign. They are basically used to store charge. As they store charge they should be carefully discharge before troubleshooting the circuit.

2. Non polarized capacitor – They does not have polarity and can be mounted any way. They are basically used to remove the fluctuation present in conversion of AC to DC.

In the circuit given below two switches S1 and S2 are used for front and rear door. When S1 is pressed diode D1 connected to it starts conducting because of that transistor T1 and T2 connected through resistor start conducting. Capacitor C1 is used to provide positive feedback to transistor T1 and T2 for oscillation. When S1 is pressed low frequency tone is generated indicating that visitor is calling from front door.When S1 is pressed at the same time diode D3 also start conducting and this in turn trigger the base of transistor T4. Now this will trigger the transistor T6 and LED 2 connected to start glowing indicating that visitor is present outside. Hence when you press the switch S1, simultaneously speaker will start sounding and LED glows it will glow until switch is released.

Similar kind of phenomenon happens when you press the switch S2. Diode D2 connected to it start conducting which provide power supply to the working of transistor T1 and T2 and the speaker connected to it start sounding. But this time it produces a high frequency tone indicating that visitor is present on rear door. When S2 is press power supply is also provided to diode D4 which also start conducting and because of that transistor T3 and T5 start conduction and LED1 glows to indicate that visitor is present on rear door.