Electric cars are the present and future of the automotive industry, yet it may not be easy to believe the first electric cars were introduced in the 1880s. The electric technology in automobiles was shunned due to cheaper gasoline cars and the unexpected developments and innovations in internal combustion (IC) engines. Electric vehicles, a greener alternative, are now the only resort in the face of alarming climate change. As crude oil is a finite resource, electric cars may be the only way the automobile industry can sustain this millennium.

The present era is a period of transition. Europe is expecting to go all-green by the 2030s. The new fossil-fuel cars may be banned entirely in Europe from 2035 onwards. The United States expects half of its vehicles on the road to be electric by 2030. Not just developed countries but developing countries are also pushing for EVs to go green simultaneously. The countries like India have already tabled a bill to scrap diesel cars in 15 years and petrol cars in 20 years. Several electric cars have been launched in India in the past three years, and several are in line.

An electric car is wholly or partially propelled by electric motors driven by the energy stored in rechargeable batteries. Since this is a time of transition, not all electric cars are 100% electric. This is what leaves many wondering what then electric cars mean. Technically, there are five different variants of electric vehicles that are loosely grouped under the term EV. In some countries, the same vehicles are classified into three or four variants.

This article will discuss different types of electric vehicles and compare them.

Types of electric cars
Electric cars can be broadly classified into five variants.

In another scheme of classification, HEV and PHEV vehicles are considered sub-classes of hybrid cars. Therefore classifying electric cars into the following variants.

At many locations, REHEVs are considered a sub-class of PHEVs.

Battery electric vehicles (BEV
BEVs are all-electric vehicles. This EV variant uses no direct fossil fuel to power it. The vehicle is entirely run on a battery-powered electric drive-train. One or two electric motors may propel the vehicle, or an integrated hub of four electric motors. An electronic motor controller controls all motors. The controller is responsible for everything speed change, torque, braking, slip differential, etc. As no IC (Internal Combustion) horsepower is deployed to the vehicle, the transmission is fully automatic. BEVs are the most efficient electric vehicles and the ones that are 100 percent green. 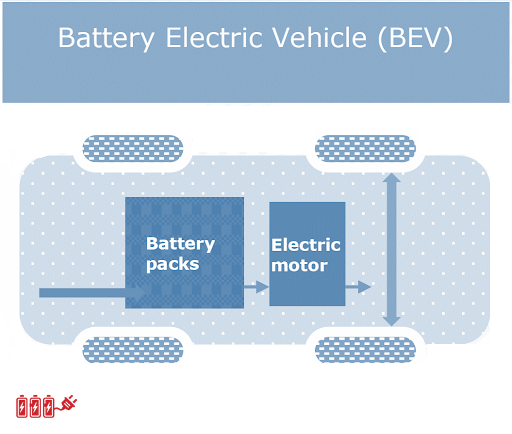 The main components used in BEV are electric motors, electronic motor controllers, drive trains, inverters, and batteries. These vehicles are capable of fast charging as well as L2 charging. The vehicle is charged by plugging it into a home or public charger directly connected to a grid or Battery Energy Storage System (BESS). The electrical energy stored in the DC battery is first converted to AC with the help of an inverter. The electronic motor controller senses the accelerometer’s acceleration and adjusts the AC power frequency accordingly. The AC power with a frequency as per acceleration is transferred to the motors or integrated hub. The motors are attached to wheels through a gears assembly, driving the car. When brakes are applied, the motors act as alternators redirecting power to the battery pack, decelerating the vehicle.

Fuel cell electric vehicles (FCEV
While BEVs require charging from a grid or BESS, fuel cell electric vehicles carry their own electricity generator. These vehicles are powered by a hydrogen fuel cell. Like BEVs, FCEVs, too, are zero-emission cars. They emit no tailpipe pollution but water. The vehicle is installed with a hydrogen tank and fuel cells. The electricity is generated by a chemical reaction between hydrogen from the tank and oxygen from the air, which leaves water as a by-product. The hydrogen tank needs to be refilled once exhausted. 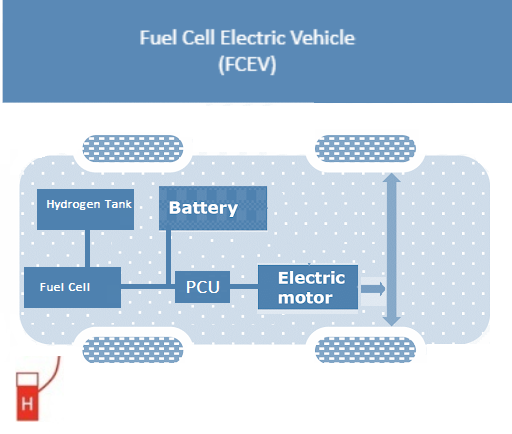 The main components of an FCEV are electric motors, a hydrogen storage tank, a fuel cell stack, and a battery management system, including an electronic motor controller and electric converter. The electricity produced by the fuel cell is stored in the battery pack, which is then used to drive the electric motors. A battery management system stores, converts, regulates, and transmits electric power. The FCEVs have an advantage over BEVs that there is a continuous current delivery to the battery pack as the electricity is produced onboard. The car also does not require frequent charging cycles like the BEVs.

FCEVs are also purely electric cars like BEVs. Compared to BEVs, these cars get less attention, and there are reasons for it. FCEVs have a complex design that demands regular maintenance. The infrastructure required for these cars is still scarce. The biggest downside of these cars is the compressor noise, which may vary from model to model.

Plug-in Hybrid Electric Vehicles (PHEV
PHEVs are a series of hybrid cars. The car is mainly powered by an internal combustion engine and includes an electric motor system as an alternative to drive the vehicle. These cars have a smaller low-voltage battery pack compared to all-electric cars. Still, the battery pack is larger compared to parallel hybrids. The battery pack in PHEVs is charged by a home or public charger connected to the grid or BESS, just like BEVs. The car starts in all-electric mode and runs on electricity until the battery is depleted. Once the battery is drained, the internal combustion engine takes charge. The car’s electric mode has a shorter range of between 20 and 50 Km. 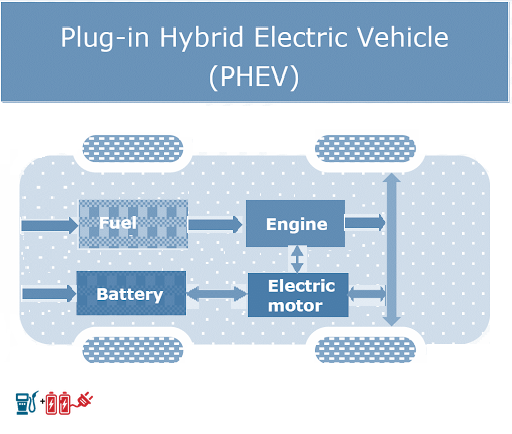 PHEVs have the advantage that they do not need to rely on charging. The car can run all-electric for daily commuting over a shorter range with a regular charging cycle. The vehicle can still be relied on for longer distances as it will switch to the engine mode once the battery is depleted. The downside is that these cars are not emission-free. When run in electric mode, they do not produce any emissions, but when switched to the engine, they produce emissions like any other gasoline car.

Hybrid electric vehicles (HEV)
The HEVs are better known as parallel hybrids or standard hybrids. In these cars, the electric motors and battery packs are only to assist the IC engine. The car is mainly driven by an engine that could be gasoline, petrol, or diesel. The auxiliary electric motors are linked to the main transmission so that both electric motors and engines drive the car simultaneously. The battery pack is not charged externally. So there is no need to charge the vehicle. Instead, the batteries are charged by the IC engine, the wheels’ motion, and regenerative braking. The battery pack gives an extra mileage of 10~35 Km. These cars produce emissions throughout driving because there is no only-electric mode of operation. 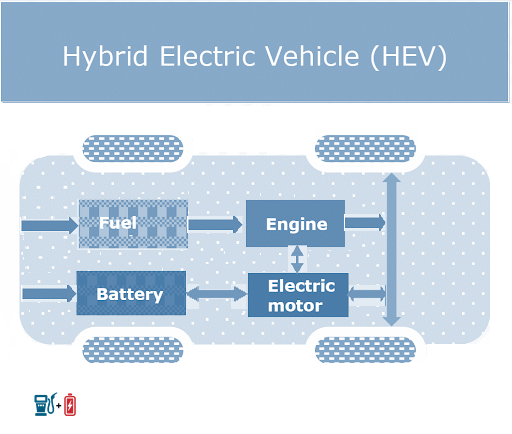 A fully hybrid car can push the car on the battery alone. The battery is used intermittently to save on fuel. However, as the battery pack is much smaller in HEVs compared to both PHEVs and BEVs, the car can run only a few kilometers in electric mode.

Mild-hybrid HEV
In mild-hybrid HEVs, the electric motors are often utilized to drive the transmission where the engine is inefficient, like when the car accelerates from a stop. Otherwise, the IC engine is mainly used to power the wheels. It essentially needs an IC engine to run the vehicle. The battery pack is recharged from the engine, and regenerative braking only assists the engine and acts simultaneously on the transmission to tip up some mileage. A mild-hybrid electric vehicle cannot propel the car on the battery alone.

Range-Extender Hybrid Electric Vehicles (RE-HEV)
These are BEVs but with a gasoline-powered generator on board as an additional assurance. The generator is only used to recharge the battery pack. For that, the range extender mode has to be selected. In range extender mode, unlike typical BEVs, these cars produce emissions. Some examples of electric vehicles with range extenders are Chevrolet Volt, Cadillac ELR, BMW i3 REX, and Nissan Gripz Concept.

Filed Under: Tutorials, What Is